On October 15, 2016, we celebrated with honor our 150th Anniversary! It was an extraordinary day with many beautiful and joy-filled events which were both historic and unforgettable.

The solemn celebration of the Holy Eucharist took place at the Basilica of Santo Cristo of Esquipulas, Guatemala, and was presided over by Bishop Ángel Antonio Recinos Lemus, Bishop of Zacapa and Santo Cristo de Esquipulas. Abbot Hector Sosa Paz, of the Benedictine Monastery, Esquipulas, concelebrated. The Sisters were given a very special place near the altar and were accompanied by two representatives from the office of the Mayor. During the Eucharist, these representatives presented the Sisters with a special Acknowledgement signed by Emp. Carlos José Lapada Rodriguez, Municipal Mayor of Esquipulas, in recognition of the Congregation’s spiritual, social and humanitarian services towards those most in need over the past 150 years. The Certificate also declared October 25 of each year as “Sisters of Charity of the Incarnate Word Day.” The Eucharist was transmitted live by channel 13.

Following the Eucharist, the Sisters hosted a celebratory meal at the convent; it was prepared by the Restaurant, Cúpulas, and was delicious. The participants were serenaded with marimba music and entertainment. Persons invited to share in the joyful celebration with the Sisters included: members of religious congregations, neighbors, guests and staff at Hogar de Mi Hermano, the Mayor and members of the Municipal Team, and persons known to the Sisters.

It was a wonderful event which rightfully gave praise and thanks to God for the many graces and blessings the Congregation has received over the past 150 years.

Praised Be The Incarnate Word. Forever! 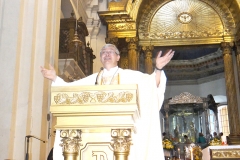 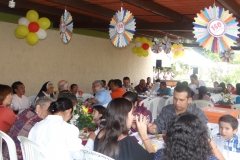 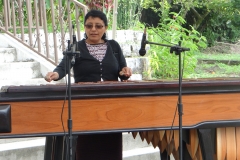