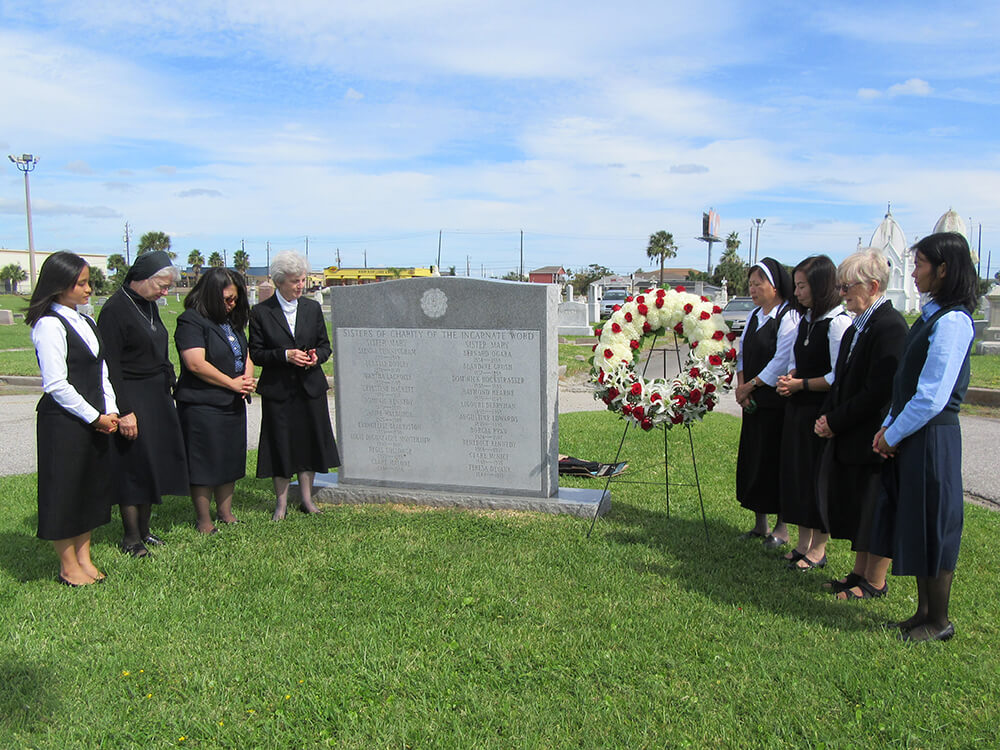 It was a beautiful day on Sunday, October 23, as the Sisters of Charity of the Incarnate Word set out for Galveston to begin their year-long celebration of 150 years of serving with gladness. The scripture readings of this day lent themselves beautifully to all of the events of this special time. The first stop was at the cemetery which has a special marker listing many of the Sisters who served in the early years of the Congregation’s history. A beautiful wreath of flowers was placed at the site. “I have fought the good fight, I have finished the race, I have kept the faith.” (2 Timothy 4: 7-8) There was a moment of silence to honor the Sisters; this was followed by prayer.

The next stop was CHRISTUS Our Daily Bread, a community center for the homeless and a fitting tribute to the Congregation’s service to Christ’s people in need of comforting. “The Lord hears the cry of the poor.” (Psalm 34) Staff from Our Daily Bread and CHRISTUS Foundation for Healthcare gave a very informative tour of the center.

The Sisters arrived at the Basilica of St. Mary’s to be greeted by many friends, volunteers, associates and former co-workers from St. Mary’s Hospital in Galveston. At the beginning of the Eucharistic Celebration Archbishop Joseph Fiorenza invited Sr. Kevina Keating, Congregational Leader, forward and she warmly welcomed all present and expressed how fitting it was for the Congregation of the Sisters of Charity of the Incarnate Word to begin its Sesquicentennial Celebration in Galveston and at St. Mary’s Cathedral Basilica. 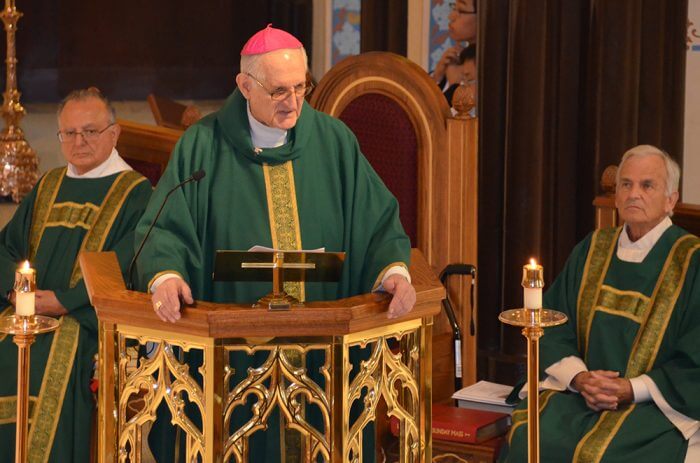 In his homily, Archbishop Joseph Fiorenza expressed his sentiments by sharing that when the first three Sisters arrived in Galveston, they made their way to this very Church to express their gratitude to God for a safe journey and to implore blessings on their mission to incarnate the teachings of Jesus in this life. “The one who serves God willingly is heard; his petition reaches the heavens.” (Sirach 35:16)

He recounted in brief the entire history of the Sisters beginning with the invitation of Bishop Claude Marie Dubuis, the Congregation’s Founder, when he wrote: “Our Lord Jesus Christ, suffering in the persons of a multitude of sick and infirm of every kind, seeks relief at your hands.” Three nursing Sisters from the Hospital of the Antiquaille, in Lyons, France answered the call of Bishop Dubuis with great generosity and courage. These were Sisters M. Blandine Mathelin, M. Joseph Roussin and Sr. M. Ange Escude who are considered the founding Sisters of the Congregation. Archbishop Fiorenza also spoke of the hospitality of the Ursuline Sisters who welcomed the new missionaries and assisted them in their efforts to learn English and begin their ministry.

He commended all who have carried out the tradition of Mother Jeanne Chezard de Matel to spread the Gospel of love and kindness and to live lives of deep compassion for the entire human family. He emphasized that love is the essence of evangelization.

The Archbishop closed his remarks by sharing a few of his personal memories. He feels that there was a Sister of Charity of the Incarnate Word present at his birth at Hotel Dieu Hospital in Beaumont. He recounted his many years of service in the diocese where his ministry crossed paths with the Sisters including his time at Queen of Peace Parish in the neighborhood of Villa de Matel where he often assisted with the daily Eucharistic Benediction and during his Chaplaincy duties at St. Joseph Hospital, Houston.

The Prayers of the Faithful were a lovely tribute to the places and people who have been such a faithful part of the Congregation’s 150 year journey of faith. Included was a prayer for Father Louis Claude Marie Chambodut who had met the Sisters at the boat on their arrival in his role as Vicar General of the Diocese. He was a veteran missionary who proved to be a life-long friend of the Congregation. Fr. Chambodut is buried in St. Mary’s Basilica.

After the Eucharist, all were treated to a celebratory reception at the Knights of Columbus Hall. Sr. Kevina on behalf of the Congregation extended heartfelt thanks to Archbishop Fiorenza, clergy, staff and the Choir of Holy Family Parish, Amy Brennan, Phyllis Harris, Benno’s Catering company, The Knights of Columbus, Allyson Neal, Maddie Nguyen, the Sisters who decorated, the Staff of CHRISTUS Foundation for Health and all who made the celebration so very special. 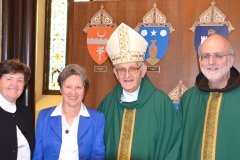 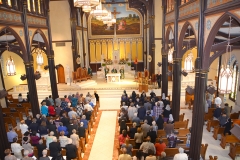 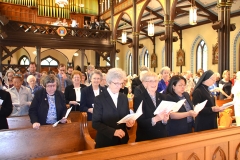