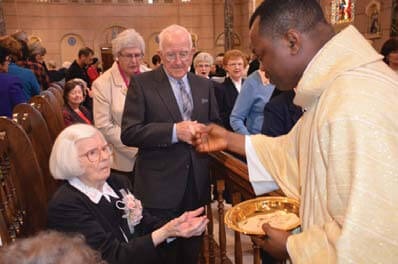 On March 2, 2017, the Congregation of the Sisters of Charity of the Incarnate Word, Houston, held a very special celebration in honor of Sr. Lucille Desmond on her 100th Birthday. It opened with the Eucharist in the Immaculate Conception Chapel of Villa de Matel, which began with a solemn procession. The Entrance Pro-cession included Sr. Lucille, her family members from England, Dr. Michael Desmond, her brother, and his wife Betty Desmond along with their two daughters Ann Hale and Mary Morris. Sr. Lucille’s former co-ministers also formed part of the procession with the Reverend Aloysius Nzekwe, presider, and the Reverends Evaristus C. Chukwu, and Faustinus I. Okeyikam, con-celebrants, all from the order of the Missionaries of St. Paul (M.S.P.). Rev. Kenneth O’Malley, C.P. arrived late due to the trafﬁc.

Jubilant singing was led by Sr. Mary Patricia Driscoll at the special Eucharist of Thanksgiving to God and provided a ﬁ tting trib-ute to Sr. Lucille Desmond’s life. During his homily, Fr. Aloysius thanked God for Sr. Lucille’s life and for blessing the world with her presence. He commended Sr. Lucille for living out the scripture that says, “by this everyone will know that you are my disciples, if you have love for one another,” John 13:35. He also thanked her for bringing the M.S.P. priests to minister at Villa de Matel. And, he commended her for her work in healing the sick and inﬁ rm in pharmacy and hospital administration for many years. Following the Mass, a festive reception was held where family members, friends, former co-ministers and Sisters gave a toast and sang happy birthday to Sr. Lucille. Following the toast and light refreshments, guests were treated to a special lunch in the Sisters’ dining room.

At the lunch, a special tribute was given to Sr. Lucille by Sr. Kevina Keating, Congregational Leader, serving as emcee for the event. She shared many heart-felt moments in Sr. Lucille’s years of ministry in pharma-cy and hospital administration. In addition, Sr. Mary Lucille’s friends, family members, co-ministers and Sisters spoke of her care for others, great leadership and especially her compassionate manner in which she led St. Mary Medical Center in Long Beach, California.

Written tributes of well-wish-es were read to Sr. Lucille by Sr. Kevina and included a congratu-latory message from the Sisters of Charity of the Incarnate Word, Houston, as well as a letter of distinction from the President of Ireland, Michael D. Higgins. A beautifully decorated birthday cake celebrating 100 years of life was presented to Sr. Lucille and was shared with the many guests following the meal. At this time, Sister Lucille received a wonderful surprise with the arrival of her niece, Mary Desmond and her nephew, Martin Desmond; their plane had been delayed coming from Ireland. Sister Lucille is the daughter of John and Katherine (Lynch) Desmond and was born in Knockatrinane, Ovens, Co. Cork, Ireland on March 2, 1917. Her baptismal name was Mary Desmond. She entered the Congregation of the Sisters of Charity of the Incarnate Word, Houston, Texas, on August 19, 1934, at St. Michael Convent, Co. Clare, Ireland. Her formation continued when she arrived at Villa De Matel, Motherhouse of the Congregation, on October 21, 1935. She entered the Novitiate on May 4, 1937, made her First Annual Profession of Vows on May 4, 1939, and consecrated her life to God on June 6, 1944 when she made her Perpetual Profession of vows.

Sister Lucille’s ﬁ rst mission experience was at St. Joseph Hospital, Houston in 1940. It was there, under the tutelage of Sr. Gerard Houston that she learned how to be a determined, yet gentle minister while in the business department.

With this preparation, she ministered as a pharmacist and administrator in several Congregational-sponsored hospitals: St. Joseph’s Hospital, Houston, Texas; St. Michael Hospital, Texarkana, Arkansas; and St. Patrick Hospital, Lake Charles, Louisiana where she served as administrator. Sr. Lucille said that she actually enjoyed both ministries.

Her greatest challenge came in 1976, when she became the administrator of St. Mary Medical Center, Long Beach, California. She managed an enormous staff of medical professionals and administrative staff and oversaw the expansion of a new building that had just been completed. Under her leadership, St. Mary Medical Center became a Class ‘A’ Trauma Center in the Greater Long Beach Area. Sr. Lucille stated that at ﬁ rst her job as an administrator seemed extremely overwhelming, especially with a staff of 300 employees and countless patients. To tackle the enormity of her role, Sr. Lucille said that she relied on the scripture that says, “…with God all things are possible,” Matthew 19:26.

In 1990, after many years of faithful ministry, Sister Lucille decided to take a well-deserved sabbatical in India. She arrived in New Delhi where the Sisters of St. Joseph were waiting for her and, while in India, she was fortunate to see most of the country.

When she returned from her sabbatical in 1991, she accept-ed the position of administrator at Villa De Matel Center. Sister Lucille was known by many as a woman of integrity, compassion, and care. And, she applied her administrative expertise for thirteen years to the Sisters and Associates of Villa De Matel. She also lent her artistic talents to the newly-built Archives in the Villa’s Heritage Center and to the construction of the grotto.

In 2004, Sister Lucille retired from active ministry to dedicate more time to prayer and presence at Villa de Matel. In her reﬂ ections, she once wrote, “I am extreme-ly grateful to God for my religious vocation, and for the grace of perseverance. I am grateful for God’s gifts, and for the wisdom, courage and skills to bring His gifted-ness to fruition. I am grateful for my years of ministry in pharmacy and administration which gave me the oppor-tunities to serve God’s people in many diverse ways.”

[Not a valid template]
Back to News