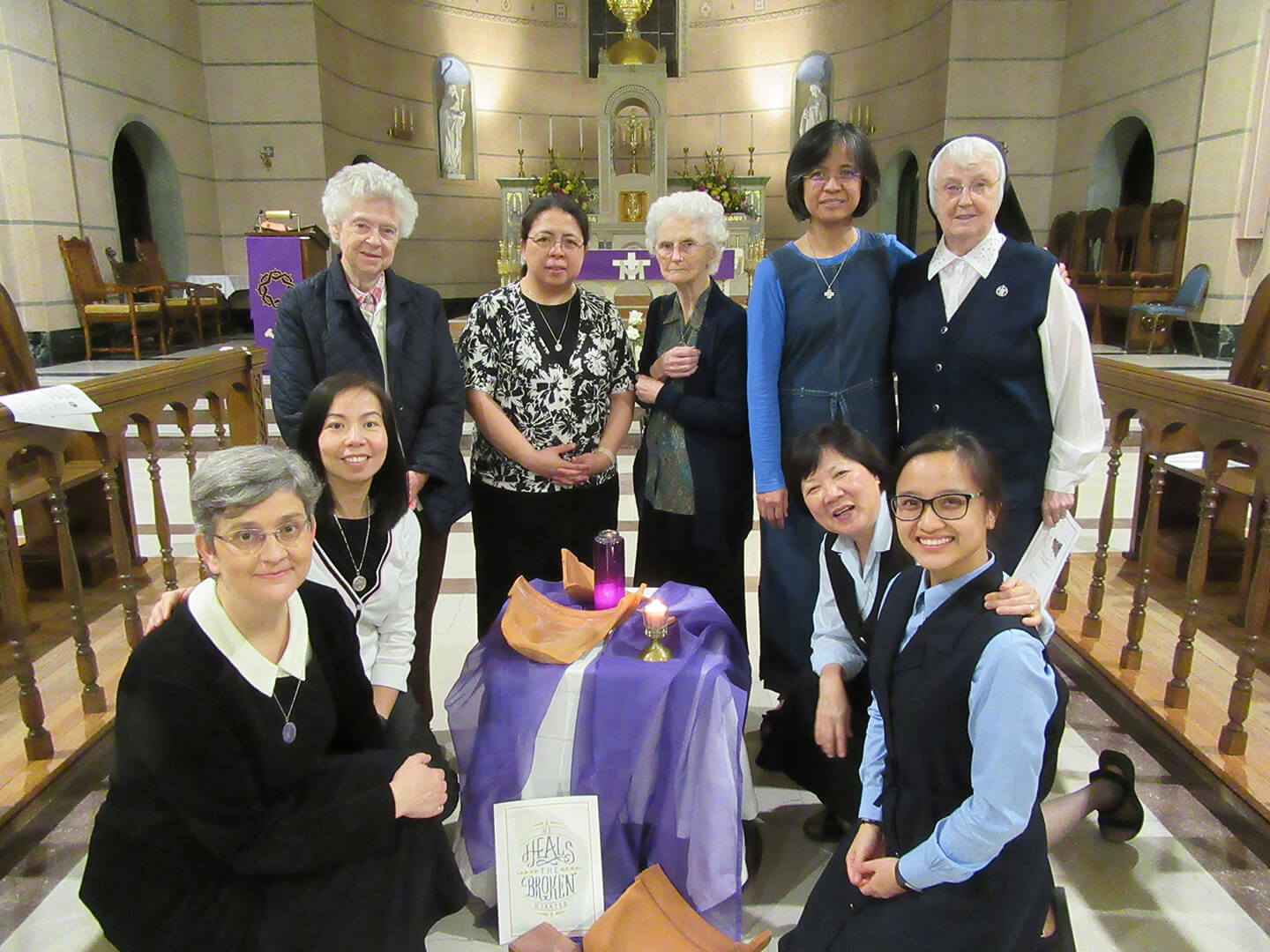 Incarnational Spirituality fl ows from the Mystery of the Incarnation – the mystery most central to our faith as Christians. Yet it took Christianity about 400 years to state it in an unequivocal way at the Councils of Nicaea (325 A.D.), Ephesus (431 A.D.) and finally Chal-cedon (451 AD). The Chalcedonian Defi nition affi rms that Christ is consubstantial with the Father according to the Godhead, and consubstantial with us in his humanity. In plain words: it is not that Jesus was really only divine with just the appearance of being human, but with no human mind and will, or the contrary, human but with an anointing unlike any other prophet. Jesus Christ, born of the Virgin Mary and crucifi ed in front of her and many others, was fully human and fully divine.

The All Mighty God had become All Vulnerable. As St. Paul says: “we proclaim Christ crucified, a stumbling block to Jews and foolishness to Gentiles, but to those who are called , Jews and Greeks alike, Christ the power of God and the wisdom of God (1 Cor. 1: 23-24).

Actually, biblical scholars focus on diff erent verses of the Wisdom Literature to point at the gradual revelation of the Second Person of the Trinity in the Old Testament that reaches its climax in the beginning of the Gospel of John. Hence the passage we chose today for our reading from Proverbs:

“Thus says the wisdom of God: When the Lord established the heavens I was there. …then I was beside Him as his craft sman, and I was his delight day by day, playing before him all the while, playing on the surface of the earth, and I found delight in the human race”. Proverbs 8: 27-31

In this and a few more verses of the Wisdom Literature, the Wisdom of God is the presence of the second person before the Incarnation. (i.e., Proverbs 9:1 Wisdom has built herself a house.) Actually, scholars like the Dominican Donald Goergen, writer and professor at Aquinas Institute of Th eology, take the beginning of the Gospel of John and substitute the Word, or in Spanish “Verbo”, or in Greek “Logos” for the word Wisdom (“Sabiduria” in Spanish, “Sophia” in Greek). In the beginning was Wisdom, And Wisdom was with God, And Wisdom was God. She was in the beginning with God, And all things came into being through her, and without Wisdom nothing came to This has implications for ecumenical dialogue in regards to the Jewish faith and even to Eastern Reli-gions. (“In the beginning was the Tao…”). It also has implications for feminist theology: “In the beginning was Sophia, and Sophia was with God, and Sophia was God”.

Any Sophias here?
We have such a wonderful tradition. But the thing I want to focus on most today is a thing I already men-tioned at the beginning: “The All Mighty God became All Vulnerable” This has personal life – giving ramifi cations for me, and I believe for many. I am afraid it continues to be a stumbling block to many as well. I can say this is why I am a Sister of Charity of the Incarnate Word. God fi nds delight in the human race, not just pleasure but delight! As Sister Ethel mentioned in the prior talk, the 13th Century Franciscan Th eologian Blessed Duns Scotus “defi ned God as Infi nite Love. He taught that the Incarnation was not required as a payment for sin; it was willed through eternity as an expression of God’s love, and hence God’s desire for consummated union with creation” (Blessed Among Us, by Robert Ellsberg). Yet God knows well our humanity. St. Paul himself describes his own struggles with it: “As to the extraordinary revelations, in order that I might not become conceited I was given a thorn in the fl esh, an angel of Satan to beat me and keep me from getting proud. Th ree times I begged Th e Lord that this might leave me. He said to me: My grace is suffi cient for you, for My power is made perfect in weakness” (2 Cor. 12: 7-9).

A baby, the Infant Jesus, or any baby, is weak, but at the same time has a lot of power. When there is a baby in a room all the attention focuses on it. It calls forth love, yes, but there is some-thing divine in it as well, I think. At the other end of life, I’ve had beautiful experiences of the Divine accompanying the sick and the dying. I am sure you’ve had those too.

God’s full embrace of our humanity, with all its weaknesses and strengths, was very liberatingto me in the Novitiate. I had arrived in the U.S. from Spain marked by a theology of shame, with great emphasis on original sin. I received this negative understanding of the human person at a school run by Opus Dei.

I made my First Communion at a school of French nuns, but then we moved to a new house and to a new and “better” school. It was a double edged sword; I breathed negative anthropology there, as well as a great love for prayer, for God. Honestly, I only started to breathe easier and easier in my body when, during Novitiate, I had the opportunity to dwell in the riches of our biblical and theological tradition at Aquinas’s Institute of Theology in St. Louis.

This liberation culminated during my first 8 day retreat at the Grand Coteau Jesuit Spirituality Center, Louisiana, where I felt God accepted and loved me just the way I was. Not when I would reach perfection but just the way I was. This liberation led me to write my own Magnifi cat praising and thanking God for loving me in my weakness and vulnerability. In preparing this talk I learned that vulnerable comes from the Latin “to wound”.  In one of his daily meditations  from the Center for Action and Contemplation web page, the Franciscan theologian  Richard Rohr asks all of us a question: “Did you ever imagine that what we call “vulnerability” might be just the key to ongoing growth?” He later implies it might well be the path to wholeness and holiness.  He affirms, “in my experience healthy vulnerable people use every occasion to expand, change and grow.

Yet it is a risky position to live undefended, in a kind of constant openness to the other-because it means others could sometime actually wound us…But only if we take this risk do we also allow the other possibility: the other might also gift us, free us and even love us.” (Richard Rohr’s Daily Meditations, 9/27/16). That is true also in my own experience in prayer.

When I have risked being open, trusting God’s ways, I have been blessed, graced, healed. Th is vulnerable mutuality is what the life of the Trinity is, “three” persons perfectly handing themselves over, emptying them-selves out, and then fully receiving what has been handed over” (Richard Rohr’s Daily Meditations,
9/27/16). In another of his daily meditations, a few days ago, Richard Rohr further develops this idea: “We like control; God, it seems, loves vulnerability.

In fact, if Jesus is the image of God, then God is much better described as Absolute Vulnerability Between Three” than “All-mighty One”(Richard Rohr’s Daily Meditations, March 8, 2017).

So, for a change, let me close with a prayer not to our Almighty God but to our All Vulnerable God, and then I am open to your questions, if any: All Vulner-able God, give us Wisdom to embrace our humanity as you did, all of it, ours, those that may be feeling the passing of the years, the sick, the poor, even the rich, those who feel vulnerable because they are undocu-mented, those who are diff erent from us in any way but with whom we share the same dignity, the dignity you gave us when you became a child. This we ask through the intercession of your most vulnerable disciple, Mary, your Mother and our mother. Amen.