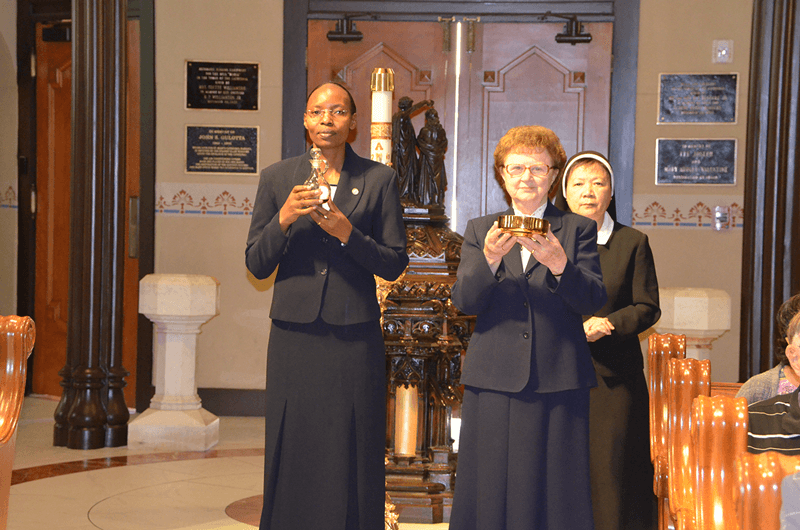 On August 25, Hurricane Harvey made landfall on the Texas Gulf Coast with winds topping 130 miles per hour as a Category 4 hurricane. The resulting floods inundated hundreds of thousands of homes, displaced more than 30,000 people and prompted more than 17,000 rescues.

Following this tragic disaster, on September 8, the Sisters of Charity of the Incarnate Word, Houston commemorated the 1900 Storm in Galveston during a Mass honoring their 150th Anniversary at St. Mary’s Basilica in Galveston.

September 8, marked the 117th anniversary of the storm, known as the deadliest hurricane in the history of the United States. The Storm destroyed property and took the lives of 10 Sisters, 90 children and more than 6,000 people. The Sisters and the Galveston community gathered to remember, pray, and support one another during this time and in the wake of yet another disaster.

The presider of the Eucharistic celebration was Fr. Frank Fabj, Pastor of St. Francis Cabrini Parish in Houston. Concelebrating with him was Fr. Jude Ekenedilichukwu Ezuma, Pastor of Holy Family Parish in Galveston.

Sr. Kevina Keating, Congregational Leader, gave a warm welcome to all gathered and reminded everyone that the first three Sisters of the Congregation made their way to St. Mary’s when they first arrived in Galveston to offer thanksgiving and gratitude for a safe voyage from France. Currently, the Sisters ministries in Galveston include CHRISTUS Our Daily Bread, a homeless resource center and CHRISTUS Point of Light Clinic in nearby Dickinson.

At the closing of the Mass, Sr. Alice, Assistant Congregational Leader/General Councilor, expressed gratitude for the Celebrants, Liturgical Ministers, and all assembled, and asked those present to remember the past and to pray for those still recovering from Hurricane Harvey.

Everyone present sang the traditional hymn, “Queen of the Waves,” just as the Sisters who perished in the 1900 Storm had done as they tied themselves to many orphans.

Sr. Bridget Kerubo Ochichi gave her impressions of the Mass and commemoration and remarked, “In the midst of experiencing the storms of Harvey and Irma, we all had reasons to give thanks to God for the wonders of our being. As we celebrate 150 years of the foundation of our Congregation, the Mass reminded us to look back where we came from and to look toward the future with hope.”

The Congregation was founded in Galveston, Texas in 1866, by Bishop Claude Marie Dubuis, the second Bishop of Galveston, Texas. The first three Sisters came from Lyons, France to establish the Congregation in response to Bishop Dubuis’ call: Our Lord Jesus Christ, suffering in the persons of a multitude of sick and infirm of every kind, seeks relief at your hands. In 1926, the Motherhouse was moved from Galveston to the newly built Villa de Matel Convent in Houston.

The Sisters currently serve in five countries around the world: El Salvador, Guatemala, Ireland, Kenya, and the United States, and their ministries impact the lives of countless people. Four major focus areas of their ministry are:

• Social concerns: ministering to the underserved and providing direct services to the poor through facilities and centers that care for abandoned children and elderly. They also partner with others in comprehensive immigration reform, the repeal of the death penalty and the abolition of all human trafficking.

• Spirituality: The Spirit of Jesus, the Incarnate Word, inspires and sustains all who engage in prayer and ministry. In support of this, the Congregation administers three spirituality centers in Guatemala, Kenya and the United States.

The Congregation of the Sisters of Charity of the Incarnate Word, Houston is made up of women religious serving within the Catholic Church as signs of God’s presence in the world. Whatever the form of their ministry, it is by means of their own lives that they witness most convincingly to the presence of Jesus Christ. They share their gifts in ministries of education, healthcare, social concerns and spirituality. Based in Houston, Texas, the Sisters directly serve those in need in El Salvador, Guatemala, Ireland, Kenya, and the United States.