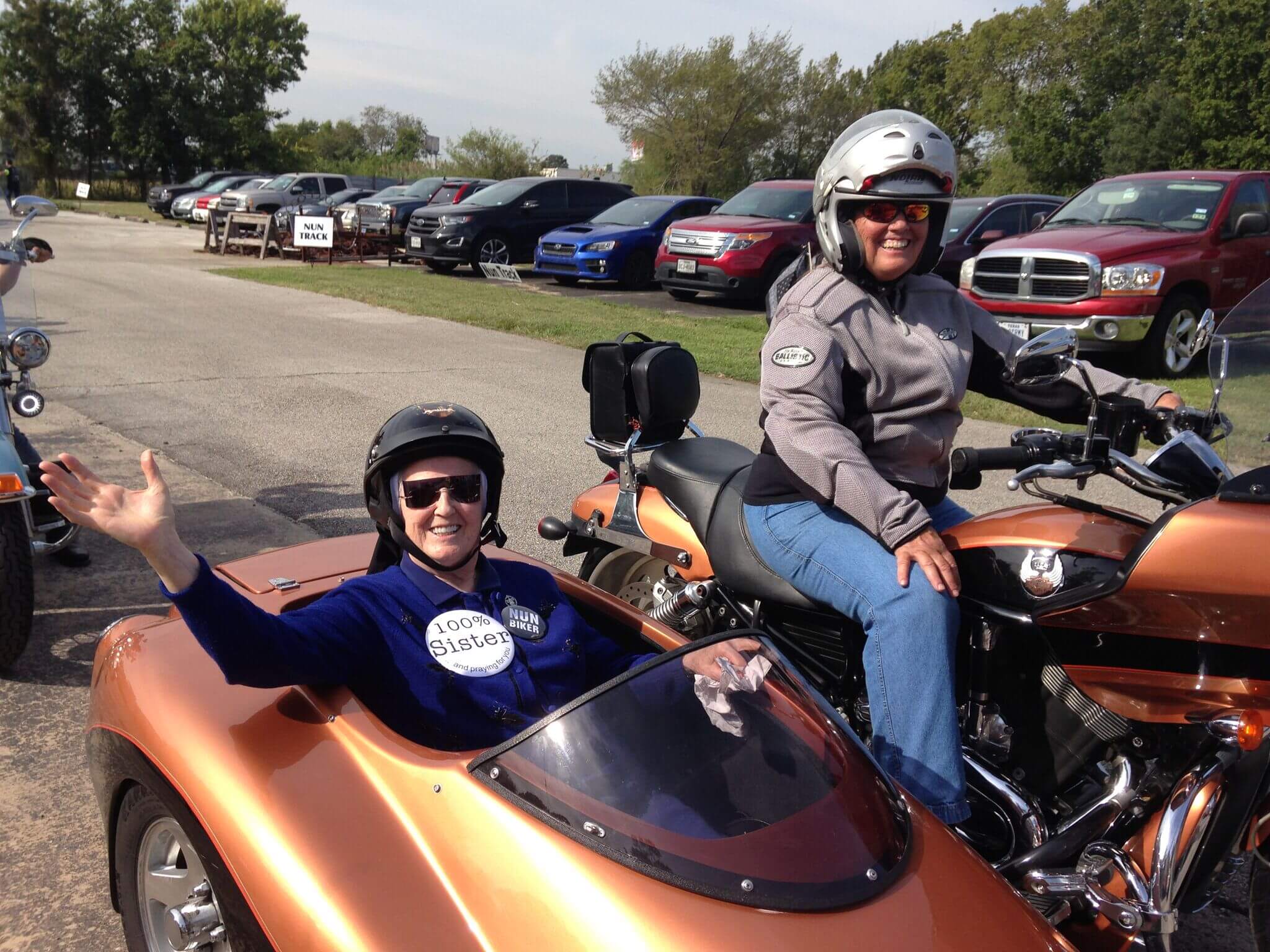 CHRISTUS Foundation for Healthcare and the Sisters of Charity of the Incarnate Word are hosting the 13th annual Nun Run on October 14. The 40-mile motorcycle ride and fund-raiser will be led by the Blue Knights International Law Enforcement Motorcycle Club.

The motorcycle ride starts at the St. Austin Center, 2002 S. Wayside Drive, and ends at Topwater Grill in San Leon, Texas. Many of the Sisters are looking for-ward to making the trip and riding along with experienced riders.

The ride begins with registration and breakfast at 7:30 a.m. and the program begins at 9 a.m. Sisters are needed to ride with the bikers on the back of a motorcycle and in the sidecars.

Also, Sisters are needed for the Nun Rides around the St. Austin property. Transportation from the Villa to St. Austin as well as to Topwater Grill on a bus will also be available for Sisters. There will be music and fun festivities before the ride.

All proceeds go to support CHRISTUS Foundation’s school-based clinics that provide health care to school children on-campus in 20 low-income neighborhood schools around Houston. More than 6,000 children receive care and because of the care, student absences are reduced. “These clinics offer health care, immunizations and mental health counseling, all free of charge, to students without their parents needing to take time from off their jobs,” said Sister Deenan.

Sister Deenan’s brother Ted is an avid rider and organizes biker fund-raisers for local charities on the West Coast. It is because of Ted’s dedication that Sr. Deenan decided to host a Nun Run. “We saw no reason why we couldn’t, and that’s how the Nun Run came about 13 years ago,” she said. A former Foundation employee also helped organize the Nun Run. Vince Heﬂey was
a member of the Houston motorcycle club called “The Retreads” and he co-led the ﬁrst ride. Vince has since retired, but because he was a founding organizer, ‘The Vince Award,’ named in his honor, is presented at the end of the run for the most helpful Nun Run organizer. Other prizes include the rider who rides to the Nun Run from the furthest distance, the oldest rider and the most beautiful bike. Last year, 450 bikers and passengers participated.

This year’s bike ride is destined to be just as successful. Sisters who wish to ride should contact Sr. Deenan at Villa de Matel. To sign up for the bus, contact Maria Martinez at extension 7140 at the Villa. Please encourage others to register at: http://www.christusfoundation.org/event/nun-run-2017/

Portions of this article were derived from the Houston Chronicle’s article on September 14, titled “Nuns on Harleys? Sisters of Charity of the Incarnate Word announces 13th Annual Nun Run.”