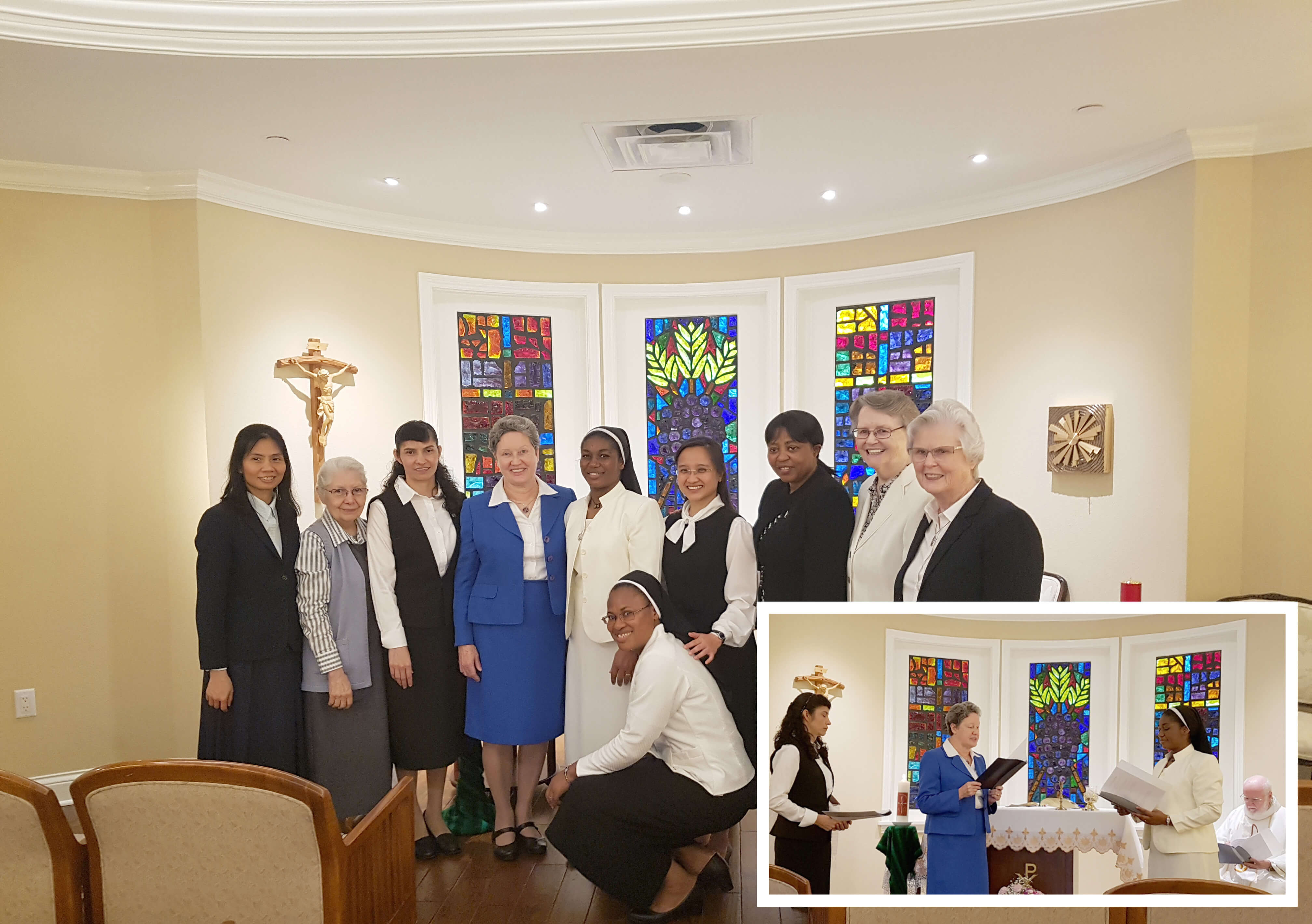 Inset: Sisters María and Kevina receive the profession of vows of Sr. Benedicta.

History was made on June 2, 2018, when the International Novitiate in St. Louis celebrated the First Annual Profession of Vows of Sr. Benedicta Chidinma Ohaeri. She is the first CCVI Sister to make her fi rst profession of vows at the new International Novitiate Community. Sr. Kevina Keating, our Congregation Leader, received her vows and the Eucharist was celebrated by Fr. Dick Sudlik, OMI, with Fathers Frank Kuczera, OMI, and Paschal Ajuka (a Nigerian priest) concelebrating. Sr. Benedicta’s brother, Kingsley Ohaeri, who is a seminarian with the Catholic Diocese of Austin, Texas, served at the Mass.

During his homily, Fr. Dick explained that the first profession of vows is the beginning of a journey – a journey that is not easy, but which calls for a deeper listening with the heart to the One who calls you and enjoins you to remain in His love. The Gospel of the day was from John’s Gospel, chapter 15. “To remain in the Vine,” he continued, is to listen to that still small voice of God, especially when the journey becomes tough and some voices within ask: “Did I really make the right choice? Do I belong here? Am I committed to this vowed life?” However, when you listen to the voice of God within, you will continue to grow fond of Him who has called you.

The first vows of Sr. Benedicta was witnessed by her younger brother Mr. Kingsley Ohaeri, friends who are of Nigerian heritage within St. Louis, our Olive Street neighbors and CCVI Sisters from Texarkana and Houston. The Intercommunity Novitiate (ICN) members were also present and included novices from the Missionary Oblates of Mary Immaculate, OMI; Dominican Sisters, Daughters of Charity and others.

We thank God for the gift of our religious vocation and our new international novitiate where we intentionally commit to intercultural living. It is in living together that we consciously witness to the loving presence of the Incarnate Word in every culture, age, race and diversity of God’s people.