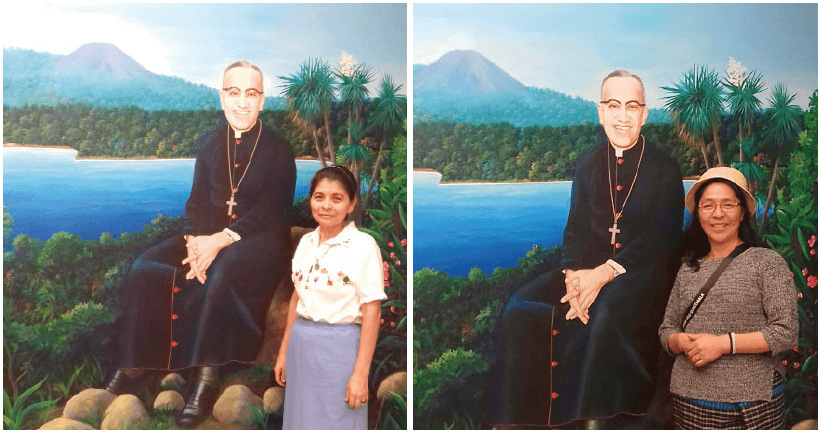 Sisters María Magdalena Rodriguez Ortiz and Santiaga Mejía Vasquez take photos with a mural located at the Monsignor Romero Historic Center, in San Salvador, El Salvador. Saint Romero had a small apartment at the Divina Providencia Chapel, the same chapel where he was murdered. The living quarters have been turned into the Monsignor Romero Historic Center, a small museum that remains open to visitors.

On October 14, Oscar Arnulfo Romero was officially recognized by the Church as a saint allowing the dedication of churches in his honor, altars dedicated and prayers directed to him as a special patron.

Reflecting on the Gospel of Mark, Pope Francis stressed the need to be uncompromising in giving ourselves completely to God. “Jesus is radical,” said the Pope. “He gives all, and He asks all: He gives a love that is total, and He asks for an undivided heart.” Turning to the newly canonized saints, Pope Francis said that all of them (saints canonized on that day), “in different contexts, put today’s word into practice in their lives, without being lukewarm, without calculation, with the passion to risk everything. May the Lord help us to imitate their example,” he concluded.

Aside from the large images adorning the façade of St Peter’s Basilica, the presence of the new saints was evident in the seven reliquaries that stood to one side of the altar throughout the celebration. To celebrate Saint Oscar Romero, Pope Francis wore the bloodstained cincture that Saint Romero was wearing when he was shot while celebrating Mass in the Chapel of the Hospital of Divine Providence on March 24, 1980. Many Salvadorans remember the day in 1980 when the news was delivered that the then-Archbishop Romero was fatally shot. 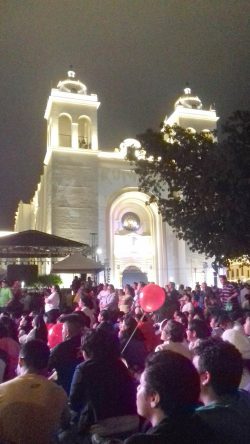 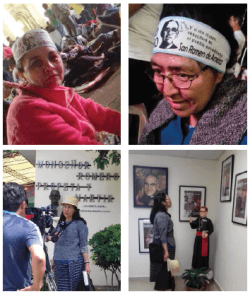 Top (L & R) Sisters Magdalena and Santiaga view the Cannonization Mass at the Metropolitan Cathedral in San Salvador. Bottom (L & R) Sr. Santiaga is being interviewed while visiting the Monsignor Romero Historic Center. Inside of the Center, Sr. Santiaga views the many murals and art dedicated in honor of Saint Romero.

“We’re not venerating a body,” Father Tojeira said, “rather someone who is alive, together with God and in the hearts of all Christians that want to continue with the reality of the Gospel.” On the morning of the Vatican Mass in Rome, Salvadorans gathered in the square outside the Cathedral to watch the ceremony on big screens, and countless others viewed it in their parishes. Celebrations of the Canonization Mass occurred in many Dioceses across El Salvador and chapel bells rang out across the countryside.

Located in Zaragoza, La Libertad, El Salvador, COAR is comprised of homes for orphaned and abandoned children, a clinic and a school. Founded by Father Ken Meyer, COAR was developed for the children who were refugees and orphans as a result of the Salvadoran Civil War (1980-1992).

Our Congregation is grateful for the opportunity to co-minister alongside the people of El Salvador for many years. And, we are blessed to share in the honor of Saint Oscar Arnulfo Romero. Praised be the Incarnate Word! 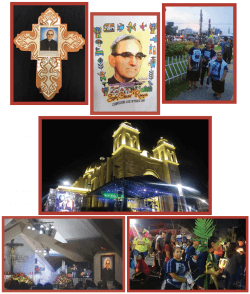 Top: (L-R) A cross honoring St. Oscar Romero given to the Sisters as a gift. One of the many expressions of art created to honor Saint Romero. Sr. Betty Campos Arias (who took photos), Sr. Edis Marilú Yanes Reyes, Vocation Seeker Maudilia and Sr. Benigna Mejía Arévalo join the the Canonization Mass procession of St. Oscar Arnulfo Romero in San Salvador on October 13. Center: The Metropolitan Cathedral was lit during the evening at the end of the procession. Bottom: (L-R) The Divina Providencia Chapel. The Canonization Mass in Rome was live streamed from the Vatican to this site as well. Srs. Betty, Benigna and Marilú participate in the procession in honor of St. Romero. 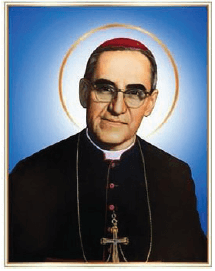 Saint Oscar Arnulfo Romero, a man of humbleness, faithfulness, perseverance, and
compassion for the suffering of the poor. Thank you for being an example of continuous
listening to God and the people.

Thank you for your enormous courage, despite the adversities around you. Even though you
feared for your life, nothing stopped you to continue denouncing the repression, injustice, and
atrocities that were committed during your time.

Saint Romero, you were the good Shepherd, a man of prayer and conviction.
You loved and faced the enemy of Peace.
You were the Shepherd who listens, welcomes, comforts,
and cares for the wounded and defenseless sheep.

Saint Romero, we ask you to intercede before God the Father, for all the people who continue
to suffer as victims of poverty, violence, human trafficking, unemployment, and inequality.

We also ask you to intercede for the Church, the Bishops, Priests, and Religious Life, so that
we may strive to be a light that shines in the midst of so much darkness, to be true messengers
of God’s love and remain faithful despite any adversities we might face.

Saint Romero, we ask you for an increase of vocations in our Congregation: The Sisters of
Charity of the Incarnate Word; intercede before God for our faithfulness to Him and to His
Mission. May we grow in Holiness, Joy, and in the comforting presence of Jesus in all the
different places we go. AMEN

NOTE: This prayer was written by By Sister Edis Marilú Yanes Reyes and prayed in the Chapel of
Divine Providence during the canonization celebration of St. Romero in San Salvador.