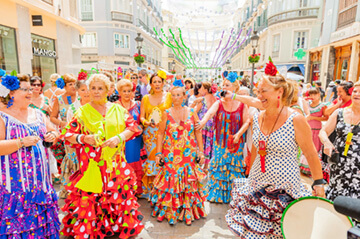 Flamenco dancers are shown enjoying the Feria de Malaga, an annual event that takes place in mid-August in Malaga, Spain. The festival is one of the largest in Spain. It lasts ten days and attracts millions of tourists every year.

Spain is one of the largest countries in Europe; situated on the Iberian Peninsula, which it shares with two other countries: Portugal on the west and the Principality of Andorra to the north. Madrid, located at the geographical center at an average altitude of 2,100 feet is the highest capital city in Europe.

The Spanish are renowned for their sociability, friendliness, and hospitality. Spanish culture is widely known for Flamenco music and dance, bullfights and beautiful beaches. Flamenco music reigns as one of the more recognizable traits of Spanish culture, and Bullfighting is inextricably linked to Spanish culture as well. Customs still vary from region to region, but several favorite traditions stand out as iconic elements of the country as a whole.

One of Spain’s most famous customs is la siesta. La siesta in Spain is a renowned tradition which consists of a short nap of about 15 to 30 minutes each day. Many Spaniards take a midday break from work or school to eat lunch and relax, and some businesses close down for a few hours each afternoon. The majority of people living and working in major cities today, such as Madrid and Barcelona no longer take la siesta, but customs remain prominent in provincial areas.

Spain has a Mediterranean climate in the southern and eastern coastal areas, as well as, a temperate climate further inland. The central Mesta has hot summers and cold winters, while the southern regions at the foot of the mountains have the warmest winter temperatures in mainland Europe.

Spanish culture was once based heavily on Roman heritage and the primary religion practiced is Catholicism, with Islam being the second most widely practiced religion in Spain. 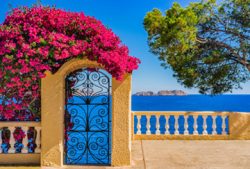 Idyllic sea view of the Mediterranean Sea Spain, at the coastline of Majorca island, Balearic Islands.

Spain’s colorful, lively and passionate culture draws millions of visitors every year who are eager to experience the fun and vibrant country for themselves. Many recommend that the best time to experience the local culture is during the traditional festivals that take place in Spain throughout the year. Each festival provides unforgettable experiences that are reminiscent of similar celebrations in the world, but uniquely specific to Spain and its multi-ethnic people. Festivals include Semana Santa (Holy Week), San Fermin (Pamplona Bull Run) and Tomatina Tomato Fight.

Spain is one of the most potent soccer countries in the world. Some say soccer is like a religion. In addition to sports, favorite Spanish cuisines include tortilla de patata, or potato omelet, as well as seafood paella. Something else to note about Spain’s cooking is that the Spanish use olive oil widely for food, and 44% of the world’s olives come from Spain.

Another cultural influence from Spain is art. The art of Spain has significantly contributed to the history of Western art. Spain’s most popular artists include Francisco Goya, Diego Velazquez, Pablo Picasso, and Salvador Dali. Spain is a country that is enjoyed for its food, scenic landscapes, festivals and hospitable residents.