On July 30, Sisters attended the Archdiocesan Prayer Breakfast held at the Houston Marriott Marquis featuring former NASA Flight Director and winner of the Presidential Medal of Freedom, Gene Kranz, who shared about his faith in God’s plan for both his personal and professional life.

Mr. Kranz served as the NASA flight director during the 1969 landing of the first man on the moon. He spoke to more than 1,000 people attending the Prayer Breakfast.

An aerospace engineer and former U.S. fighter pilot in Korea, Kranz retired from NASA in 1994 after 37 years of federal service working on the Mercury, Apollo and Shuttle space missions. He told everyone that, “God’s mark is everywhere and is on everything.”

He shared childhood memories of growing up in Ohio and serving as an altar boy at St. Agnes Catholic Church.

“I remember serving at morning Mass that turned into weddings for the soldiers about to ship off. Our priest, Father John Jamison, was a father figure to many whose fathers were fighting in the war,” he said.

With his interest in military service and becoming a pilot, he completed pilot training at Lackland Air Force Base in Texas in 1955. Shortly after receiving his wings, Kranz married his wife, Marta Cadena, who made his vests for the Apollo missions, including one exhibited in the Smithsonian Museum.

Looking for work as a test  pilot, he was reading a trade jour- nal. “Whenever there is a fork in  the road and a major decision, it’s always part of God’s plan,” he said. “The government was looking into the feasibility of putting Ameri- cans in space flight,” Kranz said. So, he applied for the program.

Kranz and his wife Marta are now parishioners at Shrine of the True Cross Catholic Church in Dickinson, where he taught CCE in past years and is an active member of the Knights of Columbus. He showed a photo projected on a screen of his tattered copy of “The Shield of Faith: Reflections and Prayers for Wartime” written by then Monsignor Fulton J.Sheen.

“I pulled this prayer book out many a time,” Kranz said. “I’ve been asked if I ever felt stress. No matter, I always felt the presence of God in my work and life.”Photo of Mr. Kranz and References Courtesy of the Texas Catholic Herald/Archdiocese of Galveston-Houston 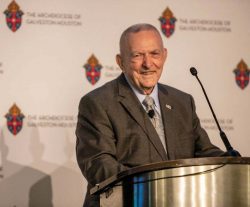