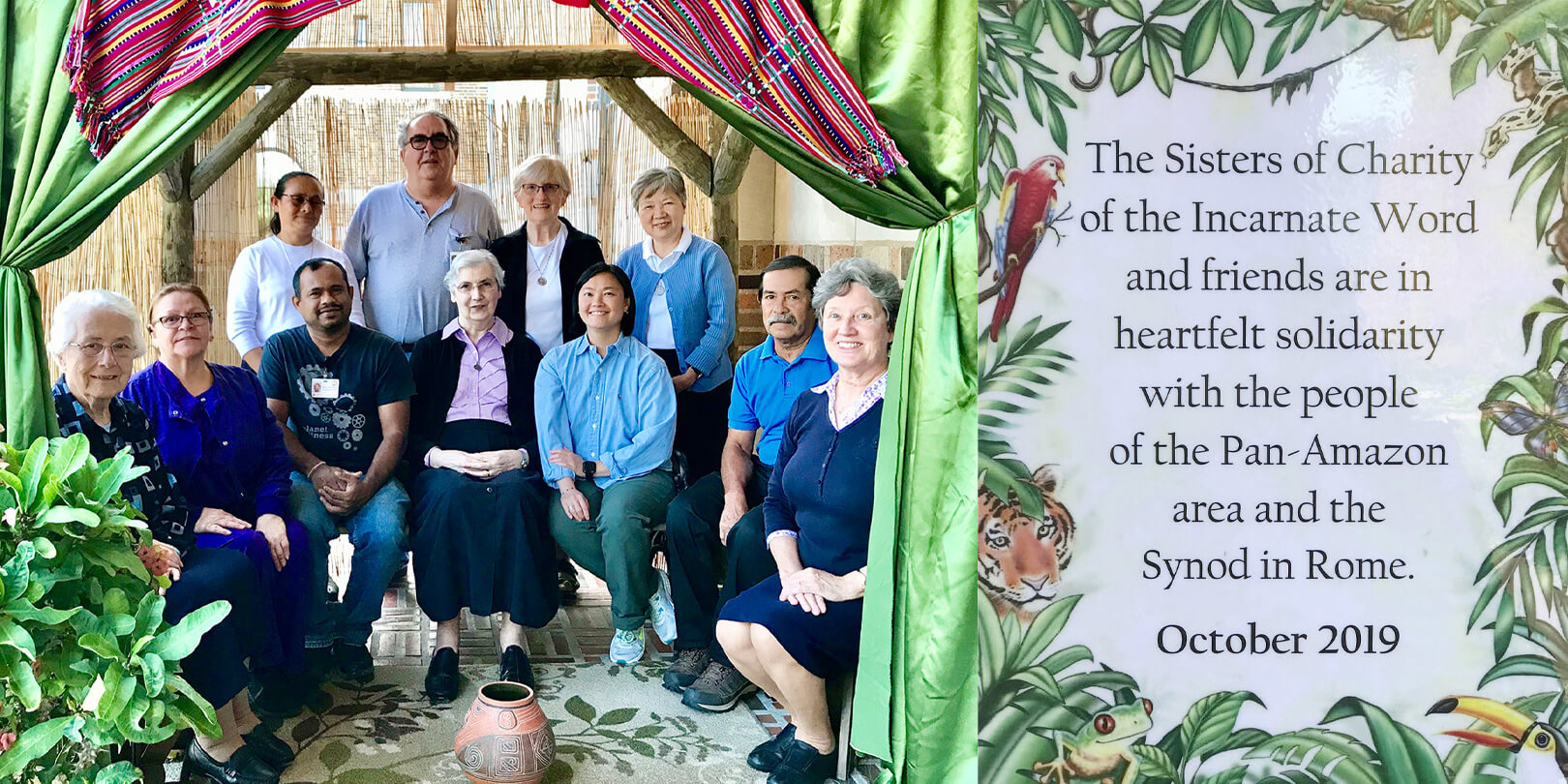 At left: Employees and Sisters gather in the tent in solidarity with the Pan-Amazonian Synod. At right: the tent’s plaque.

As Sisters of Charity of the Incarnate Word, we want you to know that in solidarity with the Pan-Amazonian Synod we created a Tent at Villa de Matel, our Motherhouse, (outside the front door) as a place of prayer and reflection for all during the special month of October. A Tent is a great reminder of the poor.

The International Union of Superior Generals in Rome (UISG) invited Congregations throughout the world to connect in terms of this special Synod by building or making a symbolic tent/space in their community as a reminder to pray for the Synod and to create awareness. John DeGreene, our talented carpenter at the Villa, took on the challenge and did a great job quickly!

On October 4, 2019, we celebrated the feastday of St. Francis of Assisi. Also during the month of October we celebrated and actively engaged in the extraordinary missionary month. A new spring time in our baptismal call to mission is desired by Pope Francis. During the same month another major event occurred in the life of the Church. The Synod for the Pan-Amazon region met in Rome from October 6th to the 27th. Both mission and great care and love for creation were integral to the life of St. Francis.

The Amazon basin, of vital importance to planet earth with its rainforest, covers 6,000,000 km², with a population of 2.8 million divided among 400 tribes that speak some 240 languages belonging to 49 linguistic families. The Synod defines the region to include all or parts of Bolivia, Brazil, Colombia, Ecuador, French Guiana, Peru, Venezuela, and Suriname. It is a region with rich biodiversity; it is multi-ethnic, multi-cultural, multi-religious. Most of the population in most countries are Roman Catholic.

Pope Francis announced that the goal of the Synod is “to identify new paths for the evangelization of God’s people in that region”, specifically the indigenous peoples who are “often forgotten and without the prospect of a serene future.” The obstacles to evangelization include the difficult terrain that makes native populations hard to reach, the great variety of languages spoken, and the resistance of landowners and business interests. A deep crisis has also been triggered by prolonged human intervention with a “culture of waste” prevailing.

The Synod transcended the strictly Amazonian sphere, because the reflections focus on the universal Church, as well as on the future of the entire planet. UISG (the Union International of Superior Generals) got approval and chose ten Sisters from the area to participate in the Synod. Six were from Brazil, two from Colombia, and two from Peru. In addition there are eleven Sisters who are “auditors”— seven from Brazil, three from Colombia, and one from Peru.