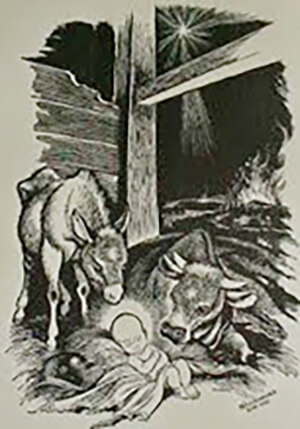 Reflection on the Good News announced by the angel on that Holy Night when Jesus was born brings to us an awareness of the profound beauty and reality of the Incarnation, but also the contrast of the harsher reality of the world of that time, as well as that of our own time in history. After centuries of preparation as recounted in the Scriptures, the Lord Jesus came as a baby into a world of persons and families awaiting his coming, but even then filled with suffering, wars, and oppressions.

Fritz Eichenberg’s Christmas picture on this page shows, in addition to the Christmas star and the charm- ing animals in the stable with the baby Jesus, a burning city in the background and a soldier’s helmet in the forefront. Much of Fritz Eichenberg’s art was created for Dorothy Day and the Catholic Worker and, like this picture, depicts God’s presence in history in the midst of war, poverty, and persecution.

Entering into the mystery of the Incarnation can help us go beyond the commercials, the distractions, and the individualism of the Christmas season that threaten to overwhelm us. Reflecting on the Lord’s coming to our earth in human flesh in the midst of tragedies, cruelties, wars, oppressions, terrible journeys, and chaos can bring us to a very different perspective from consumerism.

What a difference an appreciation of this mystery can also make in how we look on our own role in human history and the history of salvation, no matter how small our role may seem. We cannot save our world alone or even as a small group. It is the Lord who does that. But we can pray that our efforts be transformed and transfigured by the Lord as we seek to follow that Christmas star.

The example of Jesus’ coming as a small child, of his birth in a poor stable may give us a clue. Our role may not be well known anywhere. Very like- ly it may be humble, but it may also be prophetic and it may be joyful, in spite of cruel realities.

Speaking about the condition of the world at the time when Jesus was born, Saint Oscar Romero said in one of his sermons, “The history of Jesus’ time is amazingly like our own. There were political groups just as there are today. Some were in favor of empire, others were against it.”

Archbishop Romero went on to say, “I wish, dear fellow Christians, that we would assimilate this news so as to make it our way of life, our proclamation, our confidence, our security. How I wish that we would be inspired, not by the pessimism, sadness, psychosis, and fear all around us, but by the angel’s confident message: “I bring you good news.”

We could add, we wish we would not be seduced by lures of power, possessions, or fame, especially at the time of the coming of God.