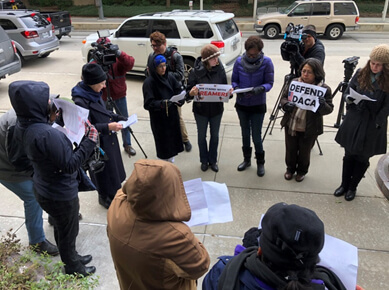 Sister Ricca Dimalibot along with others gather to pray and advocate for DACA youth. Photo Credit: David Herrera @DavidHerreraTV

As the U.S. Supreme Court was hearing oral arguments in the Deferred Action for Childhood Arrivals program or DACA in Washington DC, Catholics in Houston and across the nation gathered in prayer and action on November 12, 2019 in solidarity with some 800,000 young immigrants whose fate rests in the hands of the land’s highest court.

CCVIs of Houston, Houston Dominicans, Casa Juan Diego and St. Michael’s Catholic Parish were
joined by professors and students from University of Houston Downtown and young people from immigrants’ rights organization, FIEL, to pray the sorrowful mysteries of the Rosary at noon before the Bob Casey federal courthouse in downtown Houston.

The Deferred Action for Childhood Arrivals program or DACA shields certain young immigrants brought to the country illegally as small children from deportation. It also allows them to apply for work permits and, in some areas, get driver’s licenses.

“I think we should be human and let them stay,” Sr. Pauline told ABC 13 Reporter Miya Shay in an interview that aired on the evening news. “It’s the only country they know. It’s where they grew up. They are wonderful young people,” she said of DACA youth. CCVIs have been vocal advocates for Dreamers for many years. Without a legislative solution on the horizon from a federal government disabled by the impeachment hearings and hyper-partisanship, the ability of these young people to avoid being deported from the only country they have ever known will be decided by the high court. The court should make its ruling in the next several months.