Early in the morning of December 7, 2019, all roads in Huehuetenango, Guatemala, led to the soccer field of De La Salle School. Here a young brother, James Miller, known as Brother Santiago, taught and worked with the indigenous young men at risk. He not only taught them, but, when they were forced to join the army, he also pleaded for their return to their studies. On February 13, 1982, he was gunned down by three assailants.

Today, about 6,000 faithful came to share in the rejoicing of the De La Salle Brothers in the Beatification of Brother Santiago. The Beatification Ceremony was presided over by Pope Francis’ representative, Cardinal José Luis Lacunza Maestrojuán, O.A.R., of the Archdiocese of David, Panama. 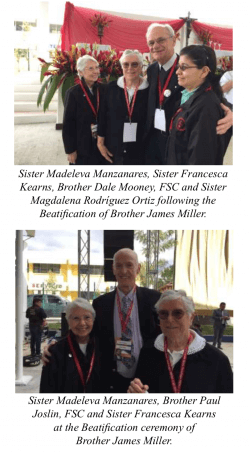 The brothers were represented by delegations from all of their schools in Central America as well as from the United States. They were joined by local clergy and many religious. Brother Santiago’s family was represented by his sister, Lois, and her husband.

When Brother Santiago fell from the assassins’ bullets, Sr. Madeleva was one of the first persons to reach him. Thus, it was fitting that she and Sr. Agnes Stretz Cushing, Poor Clare, brought up the flowers in the Beatification procession of his relic.

The reliquary followed on a float carried by the brothers. The reliquary contained hair and a fine filament of tissue that Sr. Madeleva used when she attended him.

It was a profound experience to re-encounter many of the religious and priests who were in Huehuetenango during the very violent days of the 80’s. We remembered the solidarity, especially with the brothers, that united us and carried us through turbulent times.

The presence of the ten bishops from Guatemala and 33 young native priests now serving the diocese was a testimony that martyrdom is the seed bed of vocations. We rejoice in the presence of our three young ladies from Huehuetenango, and pray that their vocation to serve the church will also be nourished by the profound ceremony of the beatification. We give thanks to God for Brother James’ life and ministry, and pray that the Holy Spirit will fill each one of us with ardent zeal for God’s mission.

Blessed Santiago Miller intercede for all of us.

When Blessed James Miller was shot on February 13, 1982, our Sr. Madeleva Manzanares was one of the first to rush to the scene of the tragedy on one of the streets in Huehuetenango, Guatemala. Realizing that he was dead, she gathered some of his blood from the sidewalk where he lay. Later, she sent it to the Villa where it now rests on the Relic Altar in the Villa de Matel Chapel.

On Wednesday, April 17, 2019, the Congregation of the Causes of the Saints announced the official date of Beatification of Br. James Miller.
On Thursday, November 8, 2018, Pope Francis approved a decree recognizing that Brother James Miller died as a martyr Feb. 13, 1982, in Huehuetenango, Guatemala. The process for declaring him a martyr began in 2009 and received this important ‘green light’ from the theological commission, which means we will soon be able to celebrate his beatification. Br. James will be the first De La Salle Christian Brother from the United States to be beatified. The cause of beatification was undertaken by the Diocese of Huehuetenango, Guatemala and received the Decree of Validity in Rome in 2010 when Brother James was designated a Servant of God and a martyr for the faith. As a martyr, Br. James must have one miracle posthumously attributed to him to reach the next level toward official sainthood, which is canonization.

In the afternoon of February 13, 1982, at the age of 37, in Huehuetenango, Guatemala, Brother James (Santiago) Miller was shot several times by three men and he died instantly. Attempts to identify the assassins were unsuccessful. After funeral rites in Guatemala and in Saint Paul, Minnesota, he was buried in the parish cemetery in Polonia, Wisconsin.