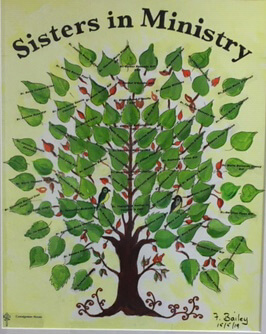 When I first came to Carrigoran, there was nothing that spoke to me of the Sisters having worked there from its beginning. Several of the hospitals begun by CCVIs have designated areas recognizing their contributions over the years. Since Carrigoran House is a SCH entity, I wanted some visible symbol of the Sisters’ contributions. This led me to work on putting together “a family tree” of the Sisters who had been in ministry at Carrigoran House beginning as far back as 1974. It also includes Sisters who served there during their International Year for approximately two months, as part of their orientation to the ministries of the Congregation. In total the names of fifty-eight Sisters are on its branches. Through the ministry of the CCVI Sisters, solid roots were put down, and its growth in strength is symbolized through its branches and new life through its leaves.

Working with Valerie Vaughan, CEO of Carrigoran House, we found the ideal spot to hang the art piece beautifully created by Frances Bailey, between the aerial photographs of our campus, the first taken in 1972, and the second in 2013.The next time you visit St. Michael Convent, be sure to stop by and take your photo with the “Family Tree of Life”, especially those of you who served at Carrigoran House. Thank you for your joyful service, and be assured that the mission continues.