Mary’s joyful proclamation of the goodness of God in all of creation reverberates for all time. The Magnificat opens with Mary’s expression of her gladness, rejoicing that God has regarded her lowly state. Her words echo those of the Hebrew Scriptures and announce the liberation of the Incarnation. Mary’s is a revolutionary prayer, the song of a faith-filled young woman conscious of her limits yet confident of God’s mercy. She gives thanks to God for looking upon her lowliness and for the work of Salvation that he has brought about for the people, the poor and the humble. Faith is at the heart of Mary’s entire story. Mary presents us with an inspiration and a challenge. She inspires us to listen to God and challenges us to be instruments of carrying his mercy to the poor.

Mary’s words spring from her trust that God is always on the side of the poor, the anawim. Mary addresses God as Holy One, Mighty One, and Savior. God acts in history to bring all to the reign of justice, closing the gap between the powerful and the powerless, the proud and the humble. The reign of God breaks into human history and will prevail because God is totally faithful to the end of time. Through the ages nations and powers have feared the proclamation of the freedom of the poor and their loss of control of the masses. Hence, the Magnificent has been outlawed in many lands and cultures when it brings to light God’s call to distribute his gifts for the common good and the service of all, including the unborn child, the poor and the immigrant.

Mary introduces herself as one in whom God has done great things because of his goodness. She proclaims boldly that our greatest glory and gift lies in God choosing us and making us the instruments of his salvation. Our fundamental dignity lies in God’s choice of us. Thus we are freed from any dependence on earthly powers. The glorious news is that our dignity is from above and can never be captured by external earthly powers. In Hebrew Scriptures when one receives a blessing it is to be shared with the whole community. Thus Mary as a poor one speaks from the community of the poor and for them.

The hymn is uttered in a major transitional time from Hebrew Scriptures to the living Word of the One that has been promised for the liberation of his people. The hymn sets the tone for Luke’s gospel, introducing the journey of Mary and Jesus. Mary speaks as a person certain of God’s everlasting covenant. God has solemnly promised to hold the people as his own. Mary knows that by God’s gracious mystery she carries within her the fulfillment of that promise; she is the new ark of the covenant. 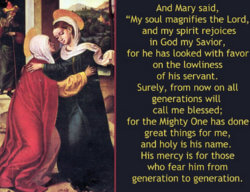 According to Pope Benedict, the Virgin Mary is conscious that she has a mission to fulfill for humanity and that her life is framed in the history of salvation. Thus she can say: “His mercy is from age to age on those who fear him”. With this praise to the Lord, the Virgin gives voice to all creatures redeemed after her “fiat,” who in the figure of Jesus, born of the Virgin, find the mercy of God.

Mary’s words assure us that God’s covenant is from generation to generation. She also shows us how we might incarnate God’s dream for us. When she visits her cousin Elizabeth she honors the mysterious work of God in both of them.The scene of the Visitation is one of joyful recognition of the mighty deeds of the Lord. Far from false humility, Mary praises, and even prophesies that all generations will call her blessed. However, all praise goes to God her savior. Mary comes into Elizabeth’s presence respectful that she is also called to carry out the covenant God. Both are united in the recognition of the gracious presence of God in their lives.

The example of Mary and Elizabeth calls us to focus on the gracious mystery of God’s work in each of our lives. With her faith, her keen gaze and her words, Elizabeth helps the Virgin to understand more fully the greatness of what God is accomplishing in her and the mission that he has entrusted to her. Ronald Rolheiser, O.M.I. encourages us to take the example of respect and interdependence of the Visitation as a guide for responding in our own times of polarization in religion, politics and culture. We need each other to understand the full revelation of the incarnation. It is only with trust that the Spirit still groans in all of creation that we can bring creation to the fullness that God desires for us. The Visitation and the words of the Magnificat mirror the encounter that Pope Francis is inviting religious to live in the work of synodality. Mary waits for Elizabeth to speak first and her hymn of praise responds to this initiative. The Visitation reminds us that without recognizing that the other carries the divine, none of us will ever pray the Eucharist for the many. In recent months Pope Francis reminds religious, in communion with the Church, to seek God’s will and to transform it into life that can awaken the world, to sing a New Magnificat.