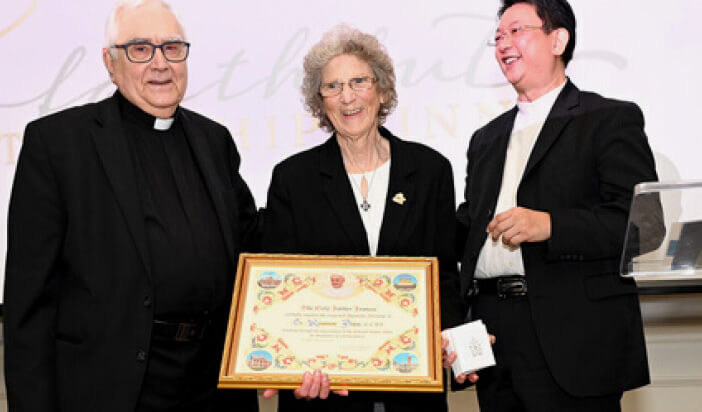 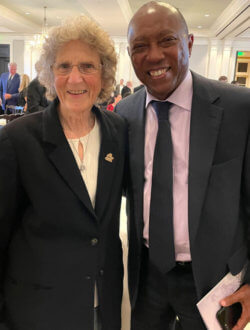 Sister Rosanne Popp, CCVI, M.D., director of CHRISTUS St. Mary’s Clinic, was honored for being a “Faithful Citizen” at the Donald F. Nesti Center for Faith & Culture at the University of St. Thomas on October 7. Held at the Houston Country Club, the award was bestowed during the annual Faithful Citizenship Dinner, billed as an evening of fellowship and inspiration celebrating Houston’s Good Samaritans, a theme taken from Pope Francis’ social encyclical Fratelli tutti.

The Center for Faith and Culture says the annual Faithful Citizen award “is conferred upon persons who are led by the Holy Spirit, and who manifest the Incarnate Love of God for this world in their lives and actions as Catholics. Their experience of the Love of God, and the way it flows through their attitudes and actions, is made real in the contributions that they make to civic, economic, political, and social dimensions of the way of life that “We the People” share as citizens of our democratic republic, the United States of America,” according to the Center.

Mayor Sylvester Turner, who was in attendance, took the opportunity to proclaim October 7 as Sr. Rosanne Popp Day. She shared the spotlight with her fellow honorees CFHC Life Director Stan Marek and Larry Payne, a community activist. The three awardees were given a framed Papal Blessings from Pope Francis as well as a medal depicting an engraving of an image of the Good Samaritan usually only given to members of the Vatican diplomatic corps.

In bestowing the award on Sr. Rosanne, Fr. Donald Nesti said that to meet her is to “know that you are encountering someone filled and on fire with the Spirit of God –purely indefatigable energy of Love.” Sr. Rosanne will speak at UST on Fratelli Tutti and her ministry in healthcare on Nov. 18.

To see a beautiful video of the award and hear Sr. Rosanne speak click here.