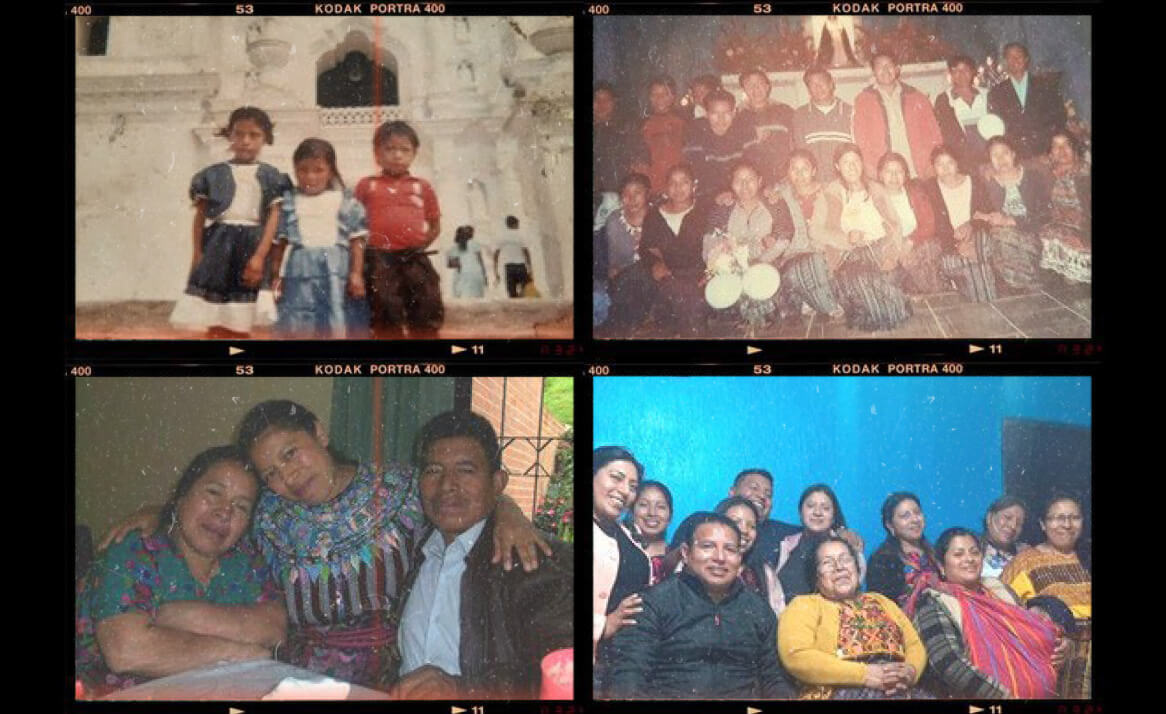 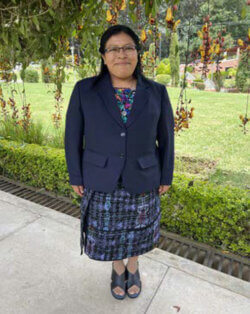 This is my experience of God’s calling me to religious life and to be a Sister of Charity of the Incarnate Word.

I am the first of 10 children; I was born in the Santa María Chiquimula municipality of the Totonicapán Department of Guatemala, but when I was 5 years old, my parents migrated to the Pachalí Aldea in Santiago Sacatepéquez. I feel like my childhood was an adventure. My mother, Rosa Ezequiel Ixcoteyac Carrillo, and my father, Juan Osorio Castro, may he rest in peace, always instilled in me faith, love, charity, respect for Jesus and people. Throughout my childhood, they taught me to be grateful and to communicate with God through prayer.

As a child I dreamt about being a missionary and traveling across the world talking about the Gospel of Jesus. I was really drawn to speaking about Him, and I saw how Jesus was changing my life; to see him differently, like a true love. When Father José Luis Pérez, pastor at my parish in Santiago Sacatepéquez, began a pastoral plan, I saw how my father would go on mission to the different villages that were part of my parish. My desire to go on mission grew even more, and when I was 12 years old, my parents allowed me to go to the church to help at the homes of teenagers; I served at my parish for
15 years and that gave me strength, fil led me with determination and empowered me as a woman. On March 8, 2008, the Blessed Sacrament was exposed at the church in Chixoles, an aldea neighboring my own, where we also attended. Seated at the end of the pews I asked God to shed light on what he wanted for me – to be a religious, or to marry, but I did not want to remain single, and I asked him for a sign.

He gave me two wonderful signs in my life, first : I dreamt of a short woman dressed in white. She was very beautiful, and she told me, “You’ re coming with me” and in my dream, I followed her to a great house. A year later, when I met the CCVI Sisters, I saw a picture of a Sister, and I told myself, “ I know her,” and I asked her name and I was told she was Sr. Carolina María Ramos, the first Sister from the Central America region. She had been the woman in my dream. The second sign was when the Sisters of Charity of the Incarnate Word arrived at my village; to me – they were angels fallen from the sky.

In April, 2008, the Sisters were involved in bringing a cross to the church in Pachalí and they became known among the people. I had not been present during that event because I was serving on a retreat for the young adults at my parish. The Sisters invited the young adult group to the convent. And as soon as I made it home, my mom, seated on chair, tells me, “Religious Sisters have arrived,” and I asked, “what habit are they wearing?” and she replied, “they don’ t wear one, you’ re going to like it” felt that my mom was another sign of Jesus’ s love for me. I was thrilled when they invited us to the convent and to their retreat house. The hospitality and charity that Sisters Marilú Yanes Reyes, Vicenta Miranda, the postulants and novices showed touched me deeply.

When I spoke to Sr. Marilú about my interest in religious life, she told me that there was a Sister who oversaw their vocation promotion. I met Sr. Juana Margarita Flores Pérez, who invited me to a retreat for vocational discernment. This was an event that encouraged me to continue my search. My parents supported me in my journey; I received, and I continue receiving my family’ s support.

My desire to live as a Sister grew while I was an affiliate. For the first time, I met the residents f rom El Amparo of San José Association in Huehuetenango, Guatemala. (El Amparo de San José is one of the Congregation’ s ministries that serves the elderly.) Seeing the elderly with their different illnesses, but in the midst of it all – very happy, was a very touching and life-changing experience for me. In a very short time, I felt part of the ministry and I identified with the Congregation’ s charism and hospitality. I deeply admired them for their courage, love and the priority with which they treated the residents; and during the s ix months that I got to know and live with the Sisters, a desire grew within me to get to know more deeply the Congregation’ s charism and spirituality.

My process of getting to know the Congregation more deeply began when the Sisters would invite me to come for prayers and retreats. When I received the letter from the CCVI Formation Team letting me know that they had accepted me to begin the formation process to become a CCVI, these were symbols of love and a sign from Jesus for me. What also attracted me to the Congregation were the words of our founder, Bishop Claude Marie Dubuis, “Our Lord Jesus Christ, suffering in the persons of a multitude of sick and infirm of every kind, seeks relief at your hands.” His words motivated me, moved me, echoed in my heart and helped me to make the decision to continue my process of becoming a Sister of Charity of the Incarnate Word. Now, as I look back, I am proud of my courage and perseverance, because I chose to follow my dreams and God’ s plan to be an empowered, extraordinary, and different woman.

“As an affiliate, I learned to recognize the face of Jesus in every sick person, the elderly and others, and I desired to participate in and get to know more intensely the work of the Sisters.” – Sr. Catarina

During my initial formation journey, I felt called to embrace the consecrated life with the Sisters of Charity of the Incarnate Word. I began my discernment and accompaniment process with the formation director, and she journeyed with me during the four stages of discernment: As an affiliate I learned to recognize the face of Jesus in every s i ck person, the elderly and others, and I desired to participate in and get to know more intensely the work of the Sisters. The postulancy was a time for the Congregation and I to mutually get to know each other, to experience our spirituality, charism, ministries and community life; it was a wonderful time that helped me to discern the call f rom the Incarnate Word. During my t ime in the Novitiate, I lived a very deep experience of God, a holistic life of awareness, communion, and mission. My time in annual vows was a time of deepening and continuing my human, spiritual and professional formation which strengthened my commitment and consecration to religious life. By making my public commitment, I vowed chastity, poverty, and obedience, for one year. This stage motivated me to continue to follow Jesus in a deep environment and I was able to wholeheartedly give myself and all my life to God and to the service of the Church.

I have incorporated prayer faithfully into my life by being persevering and practicing new methods of contemplation. This has allowed me to feel united to the Incarnate Word, to Mary, Mother of God, and the Universal Church, to be aware of the signs of the times and to respond to the mission, to be a person of synodal perspective.

Mary, Mother of the Incarnate Word is an example, of a humble woman, a believer, a model of her people, open to the new things that come from God which changed her life in a new way. In fidelity to the word of Jesus, Mary invites me to be docile, committed, open and to be filled with compassionate love, for those most in need. Mary, in my religious life journey, is of great importance, because she’s a woman that was open to the new, who supported and guided me in my Journey toward Jesus.

Community life is an opportunity to get to know Jesus even more through the Sisters; it is an aspect of my vocation that I have cultivated with love, gladness and perseverance. I t has been a blessing from God to share my gifts with humility and empowerment, in community and mission. I have incorporated community and prayer life with a service of gladness in the ministries. It is an experience that gives me passion and life and makes me feel like a CCVI Sister, following the example of Bishop Claude Marie Dubuis and the founding Sisters.

In 2021, I began preparing for my final vows during my international experience in Houston, Texas. I was accompanied by Sister Helena Adaku Ogbuji and Sister María Magdalena Rodriguez Ortiz, formation directors. During this stage, I felt the Incarnate Word’s love in a special way. I am grateful for the opportunity to get to know myself, new cultures and to live new experiences; it was a graced time for me.

My discernment and transformation journey led me to profess my perpetual vows as a Sister of Charity of the Incarnate Word.

During my Profession of Final Vows on July 16th, I felt profoundly identified with the Congregation and grateful for the opportunities that I received with all these wonderful gifts. On that day, when the celebrant, Father Félix Garcia, said my name during the blessing, I felt an immense gratitude; and when Sister Celeste Trahan gave me my ring, upon receiving it, I felt great joy. I was moved, because it represents my covenant and commitment to be faithful in perpetual love to the Incarnate Word. In all my years of prayer and joyful service, I have created a transforming journey of love because God’s timing is perfect; moreover, it brings me c loser to those needing and seeking relief at my hands.

During the litanies, while on my knees, I felt touched, connected and an immense gratitude to God, who filled my heart with joy. I acknowledged that I ’ve never been alone in my journey, and that I ’ve always been accompanied by the Incarnate Word, the saints, and the whole Congregation.

The Mass was celebrated on July 16th at Casa de Retiros Verbo Encarnado at Aldea Pachalí in Santiago Sacatepéquez. I t was a very special day and I felt profoundly joyful in celebrating my commitment, faith, and covenant with the Incarnate Word, which coincided with the Feast of Our Lady of Mount Carmel. I was especially touched and grateful to see my family, CCVI Sisters from the Central America and U. S. regions, friends, and celebrants, because they were with me during this special moment. I am grateful to the Sisters that joined us in prayer, but could not be with us physically, and for the gifts and cards I received.

I am very grateful to Sister Santiaga Mejía Vásquez and her team for handling the logistics and preparing the food and environment. The Mass for my Perpetual Profession was a joy and a great blessing for me and the Congregation.

Above all, I would like to give thanks to the Formators, Sisters Edis Marilú Yanes Reyes, María Otilia Guerra Chinchillá, María Magdalena Rodríguez Ortiz, and, Helena Adaku Ogbuji, for walking with me during my formation, and to the communities where I was sent on mission: La Anunciación Convent in Aldea Pachalí, Santiago Sacatepéquez, Verbo Encarnado Convent in Zone 1, Guatemala, Santa Teresita Convent in Huehuetenango and Casa de la Paz Convent in Houston, Texas. May God bless you all.