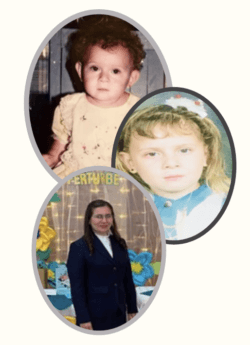 My name is Sister Helen Aida Villalta Ríos, originally from El Salvador. I was born in the Department of La Unión and grew up in a small village with a lot of natural resources and a good atmosphere. My parents are Dominga Del Carmen Ríos Bautista and Julio Antonio Villalta Reyes.

During most of my childhood and youth, I lived with my maternal grandparents, who instilled in me the religious values of the Catholic faith. I feel very grateful for the love and formation during the process of my growth that they gave me. I was baptized in 1991, in the chapel of the village, the same place where I received my First Communion in 2001.

I attended kindergarten in the school of my village in 1995 and primary school in the years 1996 – 2007 in the educational complex of Intipucá and secondary school in the years 2008 – 2009 in the Francisco Gavida Institute of the Department of San Miguel. My maternal grandfather formed an important role in my learning as he taught me to read and write. I also remember that he taught me my first prayers: Guardian Angel Prayer, Our Father, and the Hail Mary. At times when we shared as a family, I used to listen to the anecdotes in which my grandfather and grandmother talked about religious missionaries who were known by all the people of the village; they experienced their presence and closeness.

They especially remembered Sister Francesca Kearns; her support provided spirituality and humanity. I feel that these anecdotes nourished my desire to be a missionary in my childhood. When I was 12 years old, I began participating in the church choir ministry and readings for 7 years.

At the age of 14, I was confirmed in the parish of Intipucá, Department of La Unión. At the age of 15, I expressed to my grandparents and relatives my wishes to be a member of a religious congregation because I wanted to be a missionary and go to different countries to support people in their needs. Above all, I wanted to experience the message that Jesus said which touched the depths of my being, in the quote from JOHN 14:6 ” I am the way, the truth, and the life.” I would ask myself, “What is that truth? What truth is He talking about? I want to find and live in that t ruth.” And I feel that I am discovering and living in that truth each day.

In 2009 I finished my studies at the secondary level. In 2010 through the catechist of the parish, I met Sister Juana Margarita Flores Pérez and I expressed my wishes to get to know her congregation that same year. I spoke with my grandparents and my mother about having an experience in order to get to know the Congregation of the Sisters of Charity of the Incarnate Word. That same year in the month of April, I began my experience in the Department of Huehuetenango, Guatemala. I was greatly impressed to see the dedication that the Sisters showed in their service in the ministry where they were and I felt the desire to render my service to the vulnerable people at the El Amparo de San José. On January 25, 2011, I began my formation process as a postulant. This experience helped my discernment and knowledge of the Congregation. On January 25, 2012, I became a novice. On January 11, 2014, I made my First Profession of Religious Vows. That same year I began my nursing studies and continued with my ongoing formation.

On July 16, 2022, with gratitude to God and the Congregation of the Sisters of Charity of the Incarnate Word, I made my Perpetual Profession of religious vows. I t was a most special day in my life. I felt accompanied by the CCVI Sisters, relatives, f ri en ds and the presence of the Incarnate Word who has always accompanied me and continues to call me to the mission I am entrusted. I respond with gratitude and joy.