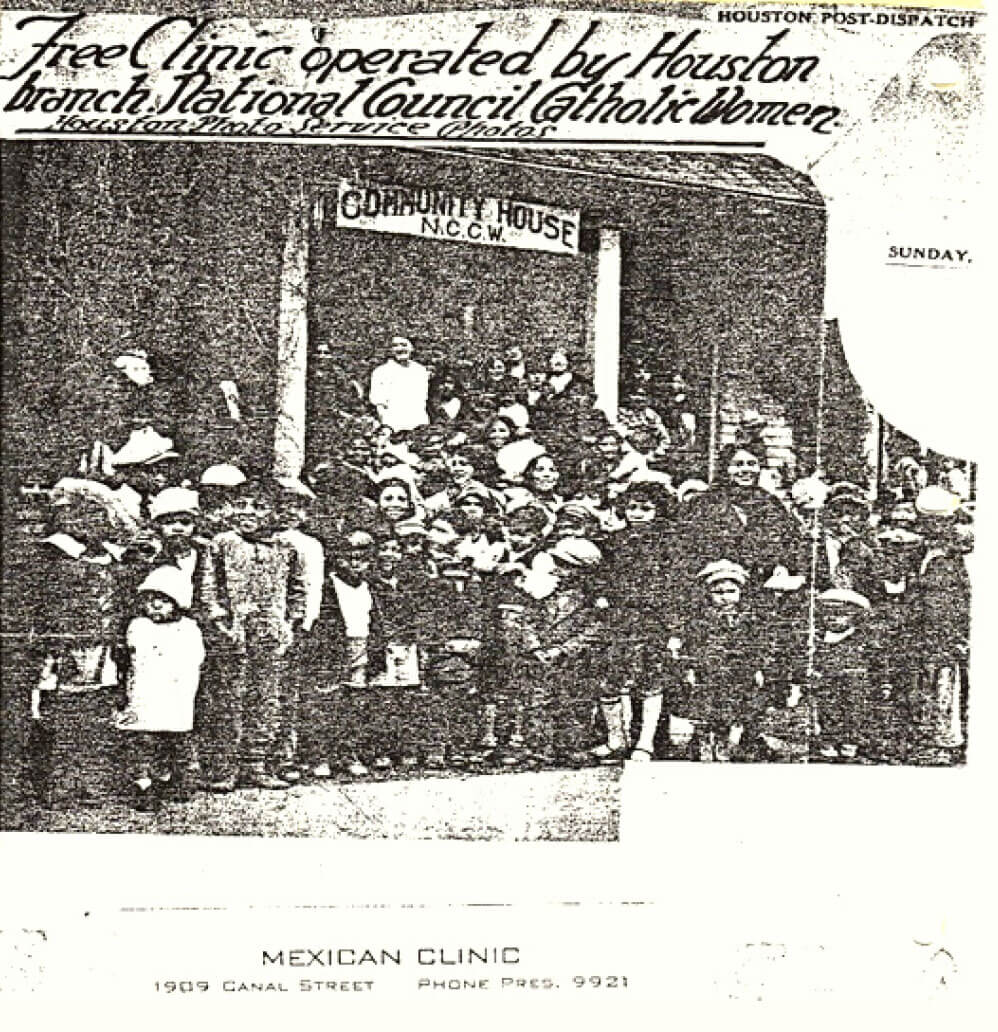 Throughout the year of 2022, the staff, volunteers, and many, many friends of San Jose Clinic are celebrating the 100th Anniversary of the Clinic’s very humble beginnings. In that year, Msgr. George Walsh heard the cry of the poor families who had immigrated to Houston due to the Mexican Revolution. He heard about the high mortality rate among the Mexican American people, especially children and infants.

The principal of Our Lady of Guadalupe School at the time was a Sister of Divine Providence named Sr. Benitia Vermeersch, CDP. She was well known as someone who went out alone, at night, to visit the families in their homes. Some historians believe that Sr. Benitia is the one who informed others about the early deaths and poor health of children in the barrio.

Msgr. Walsh called upon the ladies of the National Council of Catholic Women, who later became the Charity Guild of Catholic Women in Houston. The story that has been passed down is that there were 59 members of the Charity Guild at the time. They collected $1 from each member to pay the rent on the house for the first Clinic. Originally the Clinic was called “the Mexican Clinic,” although they assisted everyone who came to their door.

Between 1946-1954, the Missionary Sisters of the Immaculate Conception of Patterson, New Jersey staffed and managed the clinic. Upon their departure, our Congregation, the Sisters of Charity of the Incarnate Word, Houston, took over the staffing until 1999. A great number of our Sisters ministered at San Jose Clinic throughout the years and were among those with really great memories of serving the underserved through good times and hard times.

Myriads of volunteer physicians from many specialties have provided care to those in need. By offering adult medicine, pediatrics, dental care and immunizations, the clinic allows the patients to maintain their health regardless of their financial situation and other circumstances. From cardiology to neurology to orthopedics, mammography and behavioral health, the Clinic offers critical services. They also provide medications with their in-house pharmacy.

In 2017, the Clinic became a member of the Texas Medical Center and is now aligned with many of the teaching programs of these medical institutions. In 2020, San Jose Clinic opened a new branch in Ft. Bend County. Ft. Bend is the most diverse county in the United States with a fast-growing population.

Joining in on the yearlong celebration, the University of Houston Center for Public History produced an in-depth publication on the history and development of the Clinic. This well-researched record includes interviews with past and present staff, board members, community members, and former patients. Award-winning restaurant owner and Chef Irma Galvan shares her memories of San Jose Clinic and what it means to Houston’s Latino community.

Many of our sisters and staff members remember that the clinic atmosphere encompassed a close, spiritual feeling that is difficult to describe. Many felt that the Lord was in the walls! Their current motto is very fitting—Forever healing! 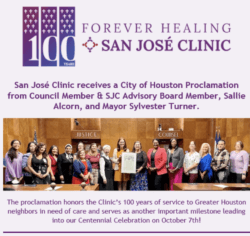