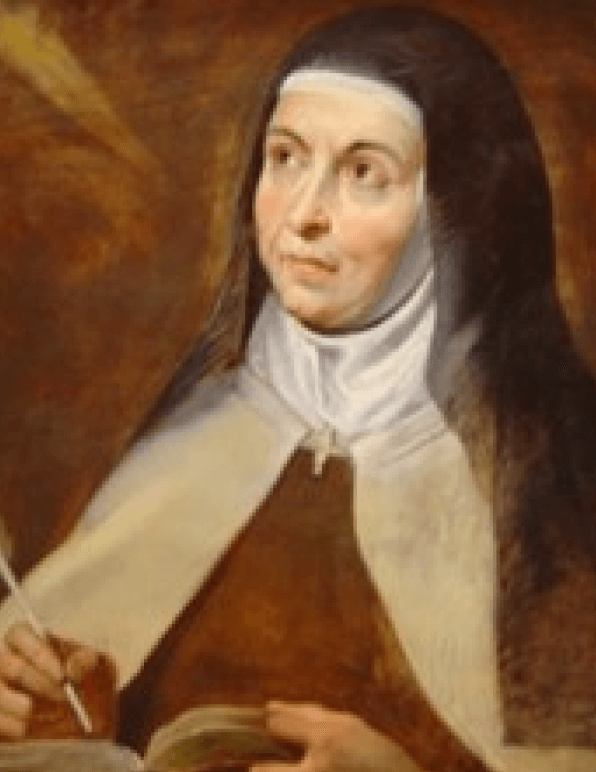 Saint Teresa of Ávila was born on March 28, 1515 at Avila, Castile, Spain as Teresa Sanchez Cepeda Davila y Ahumada and died on October 4, 1582 at Alba de Tormes of natural causes in the arms of her secretary and close friend Blessed Anne of Saint Bartholomew.

Born to the Spanish nobility, she was the daughter of Don Alonso Sanchez de Cepeda and Doña Beatriz. She grew up reading the lives of the saints, and playing a “hermit” in the garden. Crippled by disease in her youth, which led to her being well educated at home, she was cured after prayer to Saint Joseph. Her mother died when Teresa was 12, and she prayed to Our Lady to be her replacement. Her father opposed her entry to religious life, so she left home without telling anyone, and entered a Carmelite house at 17. Seeing her conviction to her call, her father and family consented.

Soon after taking her vows, Teresa became gravely ill, and her condition was aggravated by the inadequate medical help she received; she never fully recovered. She began receiving visions, and was examined by Dominicans and Jesuits, including Saint Francis Borgia, who pronounced the visions to be holy and true.

She considered her original house too lax in its rule, so she founded a reformed convent with Saint John of Avila. Teresa founded several houses, often against fierce opposition from local authorities. She was proclaimed a Doctor of the Church on September 27, 1970 by Pope Paul VI. She was beatified April 24, 1614 by Pope Paul V, and canonized on March 12, 1622 by Pope Gregory XV. Her Feast Day is celebrated each year on October 15.