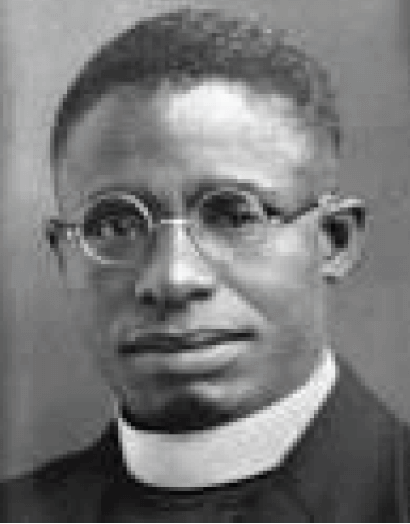 Blessed Cyprian Michael Iwene Tansi was born in 1903 in Igboezunu near the ancient city of Aguleri in southern Nigeria. His parents, John Tabansi and Ejikwevi were Igbo farmers who practiced the “traditional religion” and gave him the name Iwene, which means “Sorrow will not kill you.” He was baptized at the age of nine and was given the name Michael. During his youth, his peers described him as studious and demanded very much of himself. In addition, it was said that he had a strong influence on his companions, who were fascinated by his decisive and precocious personality, both on human and religious levels, and also by his dutiful devotion to God and the observance of religious principles.

Father Michael entered St. Paul’s Seminary at Igbarium in 1925. After ordination in 1937, he served as a parish priest in several villages. It was important for him to know all his parishioners, so he would travel on foot and on his bicycle to get to know all of his followers. He also longed for quiet prayer. His bishop permitted him to join the Trappist Cistercian Abbey in England. In the Monastery, Father Michael took the name of Cyprian. He hoped to open a Trappist Monastery in Nigeria.

Father Michael died on January 10, 1964, in Leicester, England. His case for beatification was opened when a young woman was miraculously healed of untreatable tumors when she touched his coffin. He was beatified by Pope John Paul II on March 22, 1998, in Oba, Nigeria. During Father Michael‘s beatification, Pope John Paul II stated in his speech that “Everyone who met him was touched by his personal goodness. He was a man of the people: he always put others before himself and was especially attentive to the pastoral needs of families. He took great care to prepare couples well for Holy Matrimony and preached the importance of chastity. He tried in every way to promote the dignity of women.”

Father Michael was the first West African to be beatified; his feast day is January 20. There is a statue of Father Michael outside the Most Holy Trinity Basilica in Onitsha.