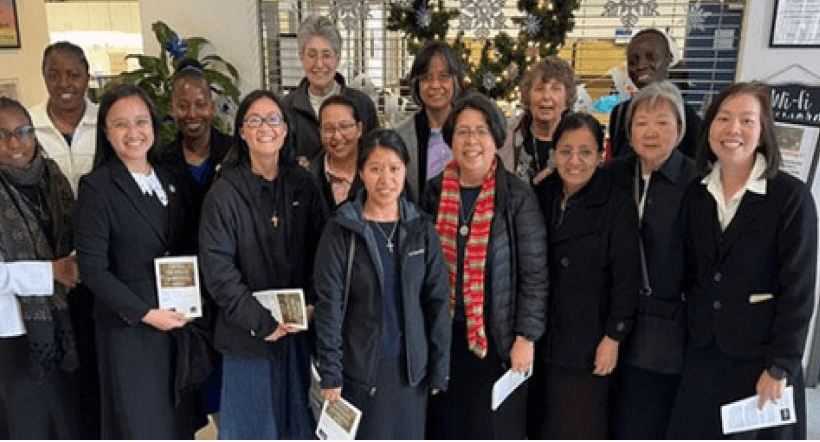 Fifteen of the Sixteen CCVI Sisters that attended the performance pictured here. “Little Central America, 1984,” was performed in both English and Spanish.

The work of the Congregation in Central America and in Houston with Central American immigrants and refugees was recognized in December in a ceremony following “Little Central America, 1984,” a live performance written and performed by Elia Arce and Rubén Martínez that explored the origin story of the “Little Central Americas” established across the United States as a result of the civil wars of the 1980’s. The ceremony held Sunday, December 18, at First Unitarian Universalist Church of Houston, honored other Central American activists and their allies, including Mark and Louise Zwick, founders of The Houston Catholic Worker – Casa Juan Diego, and Rev. Robert Schaibly, long-time pastor of First Unitarian Universalist Church, the first Houston church to offer homeless refugees shelter in the sanctuary of their church. Mark Zwick passed away in 2016 followed by Rev. Schaibly in 2019.

The performance, its producers said, “brought together poetry, live music, and testimonials recreating the era when the conflicts in Guatemala and El Salvador displaced over one million people and spawned transnational solidarity through the Sanctuary Movement.”

Many CCVI Sisters worked in Guatemala and El Salvador during that time period, ministering to the people in various capacities during great social upheaval and trauma. Currently, the Congregation supports ministries in education, spirituality, and care for poor and abandoned elderly in Guatemala and does parish ministry in El Salvador.

Sr. Paulette Shaunfield, one of the first four CCVI missionaries to Guatemala who arrived in the country in 1963 and lived there through various periods until 1984, was supposed to have received the recognition on behalf of the Congregation but had an unexpected commitment. Sr. Madeleva Manzanares (pictured right ,) who had also worked in Guatemala for many years and now serves in CCVI’s Casa San José ministry to new Guatemalan immigrants in Houston, took her place on the stage to accept a painting representing “Hope.” The producers of the play also wished to acknowledge the Congregation’s current work supporting Indigenous families immigrating to the East End.

Sr. Betty Campos, who is from El Salvador, said she enjoyed the music and creativity of the play and the way it conveyed the message of family unity throughout. She said, “People leave their home countries because they are looking for a better life for their families.” She was also inspired to hold on to her cultural roots, which she knows can be lost for fear of drawing discrimination or not being accepted in the dominant culture. Sr. Betty said, “In this presentation I saw a group of Latinos valuing their culture, their roots, honoring their history. This has its merit; and I see it as a beautiful way of living interculturality.”