“Our Lord Jesus Christ, suffering in the persons of a multitude
of sick and infirm of every kind,seeks relief at your hands.”

We, the Congregation of the Sisters of Charity of the Incarnate Word, Houston, Texas are women religious serving within the Church as signs of God’s presence in our world.

Entrusted as we are with the mission of embodying the love of the Incarnate Word, we bear in mind that, whatever the form of our ministry; it is by means of our own lives that we witness most convincingly to the presence of Jesus Christ. We share our gifts in ministries of education, healthcare, social concerns and spirituality.

Based in Houston, Texas, we directly serve those in need in El Salvador, Guatemala, Ireland, Kenya, Mexico and the United States.

The Congregation’s Leadership Team comprises Sister Kevina Keating, Congregational Leader, four General Council Members, a General Treasurer and a General Secretary. Their responsibility is to guide the Congregation to live out its mission and vision. 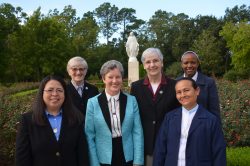 In the beginning… there was a Call.

Bishop Claude Marie Dubuis was the second Catholic bishop of the Diocese of Galveston, which then included the entire state of Texas. Riding long journeys on horseback, he witnessed the overwhelming sickness, disease and poverty of the people. Seeking help for those who were suffering, he issued a call in his native France for Women Religious to come to Texas to help care for the sick and infirm in the name of Jesus Christ. He implored,

“Our Lord Jesus Christ, suffering in the persons of a multitude of sick and infirm of every kind, seeks relief at your hands.”

On October 25, 1866 the three founding members of the Congregation of the Sisters of Charity of the Incarnate Word, Houston, Texas arrived in Galveston. They were taken to the Ursuline Convent, as their own convent and hospital were still under construction. Here they began studying the English language and making provisions for their ministry. In February the Sisters moved into their own convent and on April 1, 1867 began working at Charity Hospital, later to be called St. Mary’s Infirmary. It was the first Catholic hospital in the state. 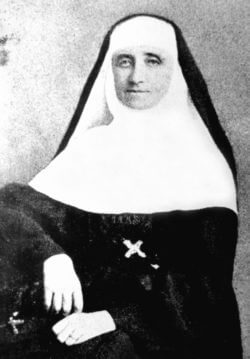 Only months after the hospital opened, Galveston was struck by the worst yellow fever epidemic in the city’s history. Mother Blandine, the Superior of the small Congregation of three, developed the disease on August 15, and died three days later. Sister Ange was also stricken by yellow fever but recovered and eventually returned to France. With the help of local physicians and community leaders, Sister Joseph, who was only 27 years old, kept the hospital and congregation going during the darkest days of the yellow fever epidemic. As more Sisters arrived from France, Sister Joseph became Mother Joseph, Superior of the Congregation.

Over the years, our Congregation spread its ministries to other cities, states and nations. As we continue to carry out our founding mission, the proud legacy of these first three Sisters has continued to be a source of strength and inspiration to us.