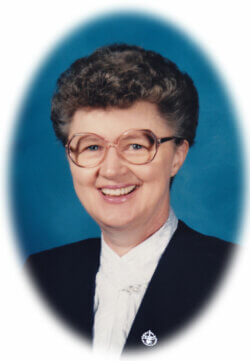 Sister Sheila Marie O’Sullivan, daughter of Cornelius O’Sullivan and Mary O’Connell, was born in Lyreaoune, Cullen, Mallow, Co. Cork, Ireland in 1941.  She entered the Congregation of the Sisters of Charity of the Incarnate Word, Houston, Texas on August 22, 1955 at St. Michael Convent, Carrigoran, Newmarket-on-Fergus, Co Clare, Ireland to begin her Pre-Novitiate Program.  On August 15, 1956 she entered the Novitiate Program at Villa de Matel, Houston, Texas and received the name Sr. Mary Agnita of the Infant Jesus. (After the Vatican II Council, she changed her name to Sheila, the name she was called as a little girl).  After two years of Novitiate, she made her First Annual Profession of Vows on August 15, 1958.  Five years later, she consecrated her life to God by Final Profession of Vows on August 15, 1963.

Having completed high school, she began her studies at Sacred Heart Dominican College, Houston and received her BA degree in 1966.  She received her CCD Teacher Diploma from the Confraternity of Christian Doctrine, Diocese of Galveston, Houston in 1967 and her full Teacher of Religion certificate in 1969.

Sister began her teaching ministry at St. Francis of Assisi School, Houston, Texas in 1962 and during the next eleven years she taught at St. Frances Cabrini School in Alexandria, Louisiana and Our Lady of Fatima School in Texas City, Texas.

In 1973, Sister Sheila was missioned to Ireland to do vocation work.  There, she joined UNISON, (a group of Sisters from many congregations doing vocation work), where she planned and implemented retreats for young girls, did home visitations, distributed the Gospel of Luke, and talked with parents.  On weekends and holidays, she worked at Carrigoran House, helping put the new house in order and working with the elderly.

In 1975, she returned to teaching in the USA and taught for the next nine years at St. Francis of Assisi School, Houston, Texas and Immaculate Conception School, Corsicana, Texas.  Her summer vacations were spent working as a Patient Representative in some of our hospitals including St. Patrick Hospital, Lake Charles, Louisiana, St. Elizabeth Hospital, Beaumont, Texas, and St. Anthony Center, Houston, Texas.

In 1985, she took a sabbatical, returned to school, and received her MA degree in Culture and Creation Spirituality/Psychology from Holy Names College, Oakland, California graduating in May of 1988.  Her next six years were spent in parish ministry at St. Mary’s Parish, Texas City, Texas and at St. John Berchman’s Cathedral Parish in Shreveport, Louisiana.  Her duties were many and varied.  She planned and implemented summer Bible school classes, trained lectors and Eucharistic ministers, visited the sick parishioners at home and in the hospitals, prayed with them and brought them Holy Communion.  She taught adult Religion classes on Sunday mornings.  She also ministered as cantor for Sunday Masses and on all big holidays.  In 1990, she became a Certified Clinical Chaplain for the State of Louisiana.

At the end of 1994, she was once again called to mission as Patient Representative in St. Joseph Nursing Home, Monroe, Louisiana where she served for four years.  It was at this time that her childhood dream of going to Africa finally became a reality.

At the end of 1998, she was called once again to a new ministry, to go to Kenya to work with children.  In preparation for such an adventure, she was asked to attend the Maryknoll Cross-Cultural Program in Oakland, California, which she found to be very helpful.  Once in Kenya, she immediately began teaching English and Religion to seventh and eighth grade students.  The small informal school was in Soweto, a slum outside the city of Nairobi.  The school itself was made of corrugated tin, and the classes were crowded — 70 or 80 students per class.  In order to be better equipped to deal with these children, she took Basic Counselling Skills Course I and II at Amani Counselling Centre & Training Institute in Nairobi.  She also completed a two-year program in the Art of Spiritual Direction at Ukarimu Centre, Molo.

In 2001, she opened and directed Elizabeth Place Children Center, a home for children in great need.  The home was licensed for 30 children.  Since the residential program was so limited and since there were many more children who needed help, she decided to start an outreach program.   In this way at least another 100 children could be helped.  Of course, all thanks to the Congregation for their financial help.

Also at this time, Sister Sheila Marie used her gifts and talents to open a new mission in Embakasi, naming it Loyola House after Sr. Loyola Hegarty, one of the Congregation’s former Congregational Leaders.

As a CCVI, Sister Sheila Marie shared her talents in Congregational services on committees, as Local Leader/Liaison, Regional Contact, as Treasurer, in Vocation work, as the Area Reflection Center (ARC) Facilitator, and held membership in the Loyola Scholarship Advisory Board, and the African Planning Committee.

In 2013, Sister returned to the USA and took a well-deserved sabbatical.  In 2014, she was missioned as Local Leader at St. Placidus, where she served until March 2019. Sister then retired to Marian Convent at Villa de Matel to continue her prayer ministry and presence in her new community.